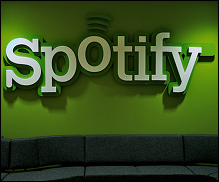 LONDON (Hypebot) – Reports are coming in that Spotify is considering an ocean jump – achieving its late December launch – without all of the major labels on deck.

With music from just two or three of the four major labels, they're thinking about pressing on, perhaps, in hopes that once inside the states, their mass appeal will garner them added favor from the remaining, holdout labels.

This is, of course, a risky move, if attempted, because with the diminished catalog size – lacking artists – may turn away curious fans.

A while back, Anthony Volodkin of HypeMachine referred to this effect as the inevitable minefield of music subscription services. His thoughts were that when new fans try out a service, they will plug their favorite bands into a site and if any of them are missing, they'll likely pass on the music site, regarding it as inferior.

Like a minefield, this strategy could blow up in Spotify's face. Will they jump the ocean? Or are they more likely to hold out, stay true to their plans?