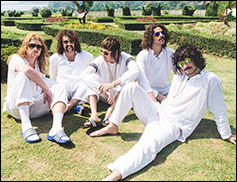 The group made their announcement via a post on their Facebook page, with a rep for the group writing:

"For some time we've been dealing with some internal issues in the band. They've heightened to the point where it's not fair to anyone involved for us not to do something. We have looked for help to try to get through this and will continue to do so. As a result we're going to try to finish the shows we have booked over New Years to the best of our ability – then the band will be going on an indefinite hiatus.

"We would like to apologise to anyone that has been affected by this."

"Last year I was diagnosed with bipolar schizophrenia and have struggled to deal with that. This is not an excuse, but it hopefully means I can get better.

To try and work through this I am seeking help and will be attending rehabilitation and therapy in the coming weeks. I am truly sorry to the people that have been affected by my behaviour. Many thanks to my friends and family for helping me through this. I hope to one day make amends for my actions," he added.

The group had almost 20 dates scheduled for after the New Year running through March, including Feb. 17th at the Warsaw in Brooklyn, NY; The Social in Orlando on Feb. 23rd; The House of Blues LA Parish in New Orleans on Feb 25th and Antone's in Austin, TX on Feb 26th. – Staff Writers