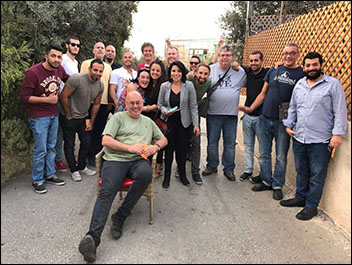 RAMALLAH, Palestine (CelebrityAccess) — Music journalist Larry LeBlanc was one of a select group of music industry figures who traveled to Palestine in November to meet over lunch with a group Palestinian artists ahead of the inaugural Palestine Music Expo (PMX).

The confab focused on the issues facing Palestinian artists in the post 9/11 world, including draconian travel restrictions, which can make concerts at venues just a few miles away challenging, much less booking a European tour.

The travel frustrations for Palestinian artists and music fans alike are compounded by deeper structural issues. The region lacks an international airport, leaving would-be touring artists to fly out of Tel Aviv, forcing them to contend with Israel's stringent permitting system.

As well, Palestine lacks the basic infrastructure for a live music industry and while there are venues, there is a marked dearth of people who can help make successful concerts a reality, including promoters, managers, and record labels.

These are the issues that Martin Goldschmidt and the founding team of PMX hope to begin to tackle with the debut of the Palestine Music Expo.

Due to take place April 5-7, 2017 across three cities, Ramallah, Haifa and Jerusalem, PMX will showcase both established and upcoming Palestinian artists to local audiences and key members of the international music industry as it seeks to shine a light on the region’s burgeoning, but internationally little-known, music scene.

“Starting out on this journey I have been thrilled by the interest, sympathy and broad-based support for Palestinian musicians from artists and professionals, right across the industry,” enthused Goldschmidt, who said that the event will mostly be produced and staffed by people from the local industry.

“During conflict, one of first human expressions to be limited is a people’s artistic culture,” added Budd. “Its prominence in everyday society is relegated and the world is denied the positive messages that music and art delivers. PMX is being created to highlight and remind people of what music can do to reinforce a message of hope and bring Palestinian culture into wider consciousness by supporting some damn good music,” Goldsmith told Billboard in a recent article about the Expo.

For more information, or to take part in PMX, please check them out online at http://palestinemusicexpo.com.