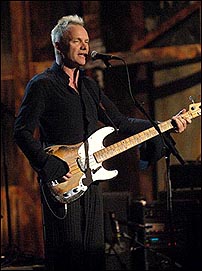 (CelebrityAccess News Service) – Sting will perform a free concert on October 7 at Chicago's famed Grant Park that is expected to draw 40,000 fans.

While Sting fans were able to win concert tickets through radio promotions beginning September 23, and able to purchase VIP tickets online (www.StingAtTheBlue5.com) from September 29 to October 5, thousands of free tickets are being distributed by "Blue Cash Roadies," a high-tech street team that will visit various Chicago locations to offer fans on-the-spot opportunities to win tickets, backstage passes and the opportunity to meet Sting and his band before the show.

Outside the Chicago market, Sting fans can experience the show as well. Blue Cash has partnered with radio stations in New York, Los Angeles, San Francisco, Philadelphia, Boston, Miami, Dallas, Houston and Washington, D.C., and created flyaway promotions that include trips to Chicago and tickets to the concert.

"American Express has a history of delivering extraordinary experiences to our Cardmembers, and the Chicago concert will be no exception, as we showcase one of the world's most popular music artists to help launch our campaign promoting Blue Cash," said Gordon Smith, president of the Consumer Card Services Group at American Express. "Sting is an icon and a perfect partner for an innovative campaign that introduces Blue Cash to Chicago with excitement and high impact."

A portion of the proceeds from the VIP tickets sold will benefit "Save the Music" programs in Chicago-area schools. This is part of a year-long effort by American Express and the VH1 Save the Music Foundation to help raise $1 million and awareness for music education programs in US public schools. VIP tickets will admit concertgoers through a private entrance and provide food, beverage, and a special viewing area from which to enjoy the show.

"As a longtime supporter of Save the Music, it's my pleasure to perform a concert that will benefit the cause," said Sting, whose 10th solo album, Sacred Love, was released on September 30.

As part of the Blue Cash marketing and promotion campaign, Chicago residents and visitors will see commuter trains, buses and London-style taxis fully wrapped in Blue Cash creative. In addition, a giant "Blue 5" will be projected onto clouds and nearby buildings each evening from Grant Park. Blue Cash ads will dominate local train stations, appear on bus shelters and glow from backlit sidewalk display panels throughout the city. Spectacular-sized billboards will appear in strategic locations around town, as will backlit posters in local health clubs. Many other visual elements will appear prominently around the market.– Jane Cohen and Bob Grossweiner