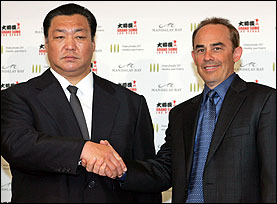 (CelebrityAccess MediaWire) — The Japan Sumo Association, the supreme governing body of the sport, will bring sumo to Las Vegas for the first time in the sport's 1,500-year history for the three-day Grand Sumo Championship tournament October 7-9 at the Mandalay Bay Resort & Casino.

The highest level sumo athletes will compete in the Grand Sumo Championship. A champion will be determined each day of the tournament with a Grand Champion crowned after the final match on October 9. The last Grand Sumo three-day tournament in the United States took place in June 1985 at Madison Square Garden in New York.

, "The Grand Sumo Championship is a unique sports and cultural event for Las Vegas," said Bill Hornbuckle, president and chief operating officer for Mandalay Bay Resort & Casino. "We look forward to hosting the spectacular tournament at the Events Center in October."

Grand Sumo Las Vegas is being produced by Hakuhodo DY Media Partners, Inc. of Japan in association with Mandalay Bay and is sponsored in part by Toshiba and Japan Airlines. The producer, Dan Yoshida, who also promoted the 1985 Grand Sumo event in New York, brought Siegfried & Roy to Japan for one year as well as tours by Cirque de Soleil and other artists.

"After our incredible experience in New York, it was just a matter of finding the perfect situation before we brought sumo back to America," Yoshida said. "Mandalay Bay has provided us with just that circumstance."

Event organizers will ensure a truly authentic experience by having a special crew construct the dohyo (sumo ring) that meets all the requirements of the sport, including the proper mixture of clay and sand as well as the correct deployment of the tawara (rice-straw bales). Further, a traditional yakata (the roof over the sumo ring) will be imported from Japan for this tournament.

Sumo transcends sport in Japan as it is interwoven with the culture. Each portion of the bout, including every move and the construction of the dohyo, is governed by rules coded over centuries. Although forms of sumo can be traced back 1,500 years, the traditions and rituals of the Japanese Edo period (1603-1867) are the basis for today's competitions.