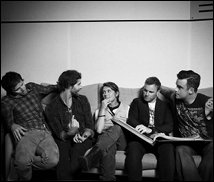 Take That has outraged their fans with the addition of new tour dates that negate previous opening night shows. The band has tacked May 27th and 28th at Sunderland's Stadium Of Light, upsetting fans who had spent the time and money dedicated to cheering Take That on for their opening night.

Fans voiced their grievances on the band's page:

"I can't believe you have changed the opening night guy's this just isn't on ! People buy opening night tickets for a reason. We were traveling up the day before cos it's so far away so have a hotel booked for 2 nights too."

Additionally, rescheduling a July show at Wembley Stadium to June 30th, has left fans equally enraged. The band released the following statement on their website:

"In order to accommodate an extra date at Wembley, it has been necessary to reschedule the planned show on Sunday 3rd July for Thursday 30th June. The promoters apologise for the inconvenience this may cause but tickets remain valid for customers who have already bought them for Sunday 3rd July."

"I cant believe after trying for 5 1/2 hrs to get tkts for the tour you have now changed the dates… This is a HUGE inconvenience!!!!!! We initially booked the weekend to avoid having to book time off from work and for childcare reasons now we will prob have to miss the tour as the new date is not suitable!!!…it does appear that the you are more concerned about those who did not get tkts as opposed to those who have already paid and made plans!!!"

"I understand concert dates being cancelled due to illness etc, but come on Take That, this is not fair. I know not everyone got tickets but why are you now punishing the ones who did? This date change will have costly implications on people and simply offering a new date or refund on the ticket price is insulting!"