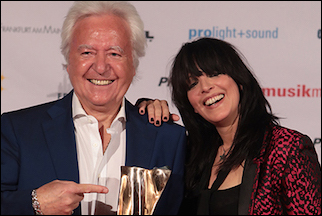 It was an action-packed evening for Max Giesinger: He handed over the LEA trophy for the Club of the Year to those responsible for Capitol in Hannover and was also able to accept an award for the Club Tour of the Year, together with his promoter Karsten Jahnke Konzertdirektion.

He also performed live on stage – as did Schiller and the Berlin Show Orchestra, ALINA, Fetsum & Guy Chambers, LINA, breakdance group Dancefloor Destruction Crew (DDC), Helmut Zerlett and last but not least Udo Lindenberg, who provided the grand finale of the live music programm. Another highlight of the event was the technically and visually outstanding LEA stage, which was the responsibility of the company bright! and renowned lighting designer Jerry Appelt, in close coordination with PRG XL Video. Friederike Unverzagt of Elements Entertainment was responsible for the title production.
Awards in 15 categories

Before his performance, Lindenberg had already been celebrating with promoter Roland „Balou“ Temme, who received the award for the Stadium Tour of the Year with his agency Think Big for Lindenberg`s "Keine Panik!" concert tour.

The LEA jury awarded Promoter of the Year to FKP Scorpio Konzertproduktionen. The Hamburg agency founded by Folkert Koopmans, which received the award in this category for the first time, organised 220 tours with over 1,000 concerts in Germany in the past season.

The only two-time winner at the PRG LEAs 2017 was Semmel Concerts Entertainment. The promoter received a trophy, together with Fetsum and his association P x P Embassy, for the PxP Festival at Waldbühne Berlin. In addition, an LEA in the Concert Hall Tour of the Year category went to Dieter Semmelmann and his team. This was awarded for the 40th anniversary concert tour of the band Niedecken`s BAP.

In the Arena Tour of the Year category, Wizard Promotions won the award for the German concerts of Zucchero. In the view of the LEA jury, Barracuda Music with David Gilmour gave the Concert of the Year, 2016, outside Schönbrunn Palace in Vienna.

Singer Matthias Reim insisted on congratulating his manager Dieter Weidenfeld on the LEA stage. Weidenfeld, longstanding manager of Howard Carpendale and acting president of the LEA Committee e.V., received the award for his lifetime achievement.