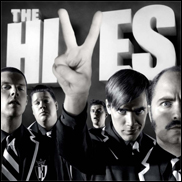 MONTERREY (CelebrityAccess MediaWire) — Ah, springtime in Sweden, when a young garage punk band's thoughts turn to touring and The Hives have proven no exception to this rule.

The boys are hitting the road in mid-February for a whirlwind through North American and Europe before the summer Festival season swings into gear.

The band will be touring in support of their latest release, The Black and White album, which dropped on November 13th in the US on Interscope rex to critical acclaim and has since been appearing in video games, movies, commercials and virtually every other form of media that has been, or ever will be known by humankind.