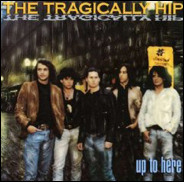 management. The question arises…should you stay with who got you there, or

My friend Jake Gold built the Tragically Hip. The first time I heard from

him was back in ‘89, when the band’s MCA debut hit the streets. It was

hard to get him off the phone, his excitement was palpable.

Jake built the Hip into the biggest band in Canada. He got them to open

for the Stones in Europe. But, despite signing them to multiple labels in

the U.S., the Hip never broke through in the Lower 48. And the band

Jake talked about the Hip 24/7. He was always dreaming up new ideas. A

fan club. Net exploitation when major labels didn’t even know what the

Internet was. "Newsweek" did a story.

He got them on national TV at the

turn of the millennium. But Jake was not the biggest manager around, and

the Hip was his biggest act. So the Hip moved on to greener pastures. To

a manager with platinum acts in his stable. A new record was released, and

did worse. The Hip still have marquee value, but they’re not as big as

when Jake managed them. They can’t be, because no one will ever care about

the Hip as much as Jake Gold did.

There are two sides to every story. And a band built of five members has

to go with the majority. This is not about the Tragically Hip so much as,

should you leave your manager? The one who you started out with, the one

Usually your first manager is your friend. Who often gives way when you

get some success. He’s only doing you a favor, because of his passion.

rises. Then, when it hits the big leagues, the act starts getting

whispered in its ear. It sees what other acts get paid, how they tour.

Lawyers tell them about their options. Major managers swoop down and offer

a better deal. So what do you do?

First, are you getting ripped off? If your manager is stealing

from you, move on. It’s too frustrating to work and not get paid.

Furthermore, if your manager is inept, leaving too much money on the table,

fucking up everything from delivery dates to routing, he should go too.

But what if your manager’s major failing is you’re his only big act?

Should U2 fire Paul McGuinness?

Even though Irving Azoff has got a stable that dwarfs that of Principle,

Don Henley, that’s how he became Irving Azoff to begin with. Oh, Irving

would make phenomenal road deals. But in the middle of the night could he

talk about what happened in Dublin back in ‘82? Could he discuss your

Maybe that doesn’t matter. Maybe your career is essentially on autopilot,

kind of leverage Howard Kaufman has. And both acts know it’s no longer

about hit records, building their cred, but cleaning up on the road.

So, if what you need is a booker, if you’re not confronted with questions

beyond whether to go on the road and what your t-shirts should look like,

it doesn’t matter whether your manager is your best friend. It’s truly a

But if you’ve got more questions than answers, if you’re still building,

you need someone who will kill for you. Their passion, thinking about you

24/7, is more important than what their status is. You can’t buy passion,

you can’t contract for it, people have to believe!

Like Jon Topper with moe. The band had a major deal for a time.

If they were managed by a hack, or someone with bigger commission paydays

in their stable, the members of moe. would be working day jobs today. But

doing their own festival. He’s not worried about the major league

business, he’s in the moe. business, which is quite profitable.

Or Coran Capshaw… Maybe being outside the system, being based in

Charlottesville, allowed him to come up with new paradigms for Dave

Matthews. Coran could think outside the box, unencumbered by how it used

However, in today’s changing times, your manager could make a deal with

Front Line and you’d get the best of both worlds. Assuming your manager’s

loyalty continued to be to you, and not the Front Line behemoth.

But there are advantages to being with Irving. First and foremost,

leverage. Irving is owed more favors than a union boss. And he uses

these, to get Christina Aguilera on seemingly endless awards shows. To get

So what do you do?

Whereas Usher’s mother is only concerned with her son.

You’ve got to gauge the passion. Passion covers up a lot of inexperience.

Passion has your manager scheming 24/7. If you succeed his image is

polished and he makes money. If you don’t, he’s a broke nobody. You’ve

got to succeed. It’s his only way out of the hellhole!

So, if you’ve got traction and you’re not getting ripped off,

you should probably stay with the manager you’ve got. It’s kind of like

again. Divorced people are skeptical rather than trusting. They look over

their shoulders. Whereas those married only once are dreamers, who believe

they can conquer the world. They trust that their team will stay together

his new album was released?

Maybe not. Certainly not many more.

But if he called at midnight, he’d get her complete attention.

You want personal management. You want someone in the trenches with you,

bonded with you. Find a good one and stick with him (or her!)