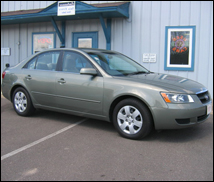 I rented a Hyundai.


They pulled up this eggplant colored piece of crap, with the Coke- bottle flairs over the rear wheels, and I winced. A Hyundai? Wasn't there anything else?


This was it. We'd already waited in line for twenty minutes at Enterprise. This had just come in. Had just been cleaned. There were no other cars.


So I got behind the wheel and took off down the expressway.


A thousand miles later, dropping off the car in downtown Boston, I regretted parting with it. I debated making an offer for the automobile right there.

I'd become enamored of its purple color, had bonded with this machine with absolutely no rattles, great sound insulation, decent handling and phenomenal gas mileage.


I remember the early nineties, when Eileen bought one. For less than $5000. A true piece of crap. With a carburetor after everybody had switched to fuel-injection. This rickety machine truly decomposed on the go. Parts were always falling off. It's a wonder she could drive it to the junkyard. Where it went, when its value had been used up, but long before the death of other cars born that year.


And when people started showing up in Santa Fes a decade and a half
later, I thought they were just too cheap to buy a CR-V. Or a RAV4.
That's how I knew someone was a cheapskate, if they bought a Hyundai.
A Korean car?


But that was before Samsung became the new Sony. Before everything we thought we knew turned out to be wrong.


I drove BMWs for thirty plus years. They are the ultimate driving machines, or one of them, but not only are repairs ultra-expensive,
they're frequent. The purchase price is just the starting price.
Budget thousands a year just for maintenance. And, if you read the car magazines, you'll see that they've had numerous problems with
their BMW test cars, like engines seizing up. As for Mercedes…
Great car, but they don't handle like a BMW. And if you're not looking for that handling finesse, maybe you should consider a…Hyundai?


Happened to me again in Denver. Enterprise once again. They were going to give us an HHR. I'd rented a Malibu, not bad, but I'm not gonna drive around Colorado in this miniaturized imitation panel truck from the thirties. No way. Didn't they have anything else?

The clerk winked and said he could offer us a Hyundai…


That Sonata was smaller than the Azera I'd rented the previous fall, but just as lovable. I'm telling you, if my present car got totaled this afternoon, I'd buy a Hyundai. Why waste all that extra money on a shinier nameplate? It's just a car. And, unlike its American counterparts, Hyundai is more than a car, it's like a pet, it's adoptable, you fall in love.


I mention all this because my eyes bugged out when I read the sales reports. Yup, Cash For Clunkers ended, and sales swooned. The right wingers thought the program was a disaster, everybody worried about
the future. You see GM's sales dropped 45% from September 2009.
Chrysler was down 42.1%. The Japanese superstars? Toyota fell 12.6%. And Honda 20.1%. Granted, Ford only dropped 5.1%, and that's good, but in the entire top ten, only three automakers showed
increases. The aforementioned BMW showed a slight uptick, of 3.6%.
But the fifth largest automaker, Hyundai, sold 31,511 vehicles, a whopping 27.2% INCREASE! And its Korean brother, Kia, sold 21,623 autos, a 24.4% increase! HOLY CRAP!


Seems the brand is no longer tarnished. People don't think twice
about buying a Hyundai. They want something good, at a fair price,
and they're flocking to the Korean manufacturers.


What this means is it's never too late for the music industry to regain the hearts and minds of the consumer. But it must offer good products at fair prices.


Instead, the labels have been like GM. Help us out! Do something about file-trading! Meanwhile, the consumer doesn't want this overpriced Top Forty beat-driven crap. Not in quantity.

And concert tickets? I'd say they're at Mercedes-Benz level prices,
but they're more akin to the numbers for Ferrari, or Rolls Royce.
Maybe U2 and the Eagles can command such high prices, but most people can't afford them. And buying a concert ticket is worse than buying a
car. With the Internet, you can now comparison shop for automobiles.
The dreaded sales manager routine, the endless rip-off negotiation, has been to a great degree decimated. But who knows what the price of a concert ticket will be until you click through to the final Ticketmaster page. The add-ons are like undercoating and floor mats, stuff you don't want that they insist you buy.


And I don't want to hear one more person say that lowering prices devalues the product, not one. People aren't resisting Hyundais because they're too inexpensive. Hell, now Hyundai is marketing the Genesis, an almost as good Lexus/Acura/Infiniti for almost ten grand less.


This is the era of value. Rather than insist that the customer come up to your price point, come down to his. Meet him halfway. Show that there's a partnership, the same way Hyundai agreed to let you return your car if you lost your job. An idea so good, other manufacturers imitated it.


People are hurting. They want entertainment. But they feel priced out by the music industry. And they're sick of being screwed. Time to rebuild.