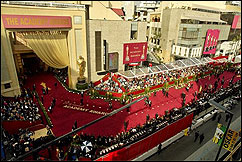 HOLLYWOOD, CA (CelebrityAccess MediaWire) — CIM Group and TheatreDreams, will manage the Kodak Theatre in Hollywood and The Chicago Theatre in a joint venture agreement. The Kodak is owned by the CIM Group’s Hollywood & Highland Center, and the Chicago was acquired by TheatreDreams in 2004.

"TheatreDreams is comprised of talented and respected theatrical producers and theatre managers with a wealth of experience and a tremendous entertainment network. This group will present an engaging line-up of dramatic and musical theatre, concerts, comedy, live broadcasts, family and special events at the theatres," said Avi Shemesh, cofounder and principal, CIM Group.

"The joint venture agreement allows us to align our overall programming and entertainment at Hollywood & Highland more closely with the theatre. We can build on the synergies within the project and create new entertainment packages and other cross-promotional opportunities."

TheatreDreams' principals and founders, Lawrence J. Wilker and William Becker, are Tony Award-winning producers and industry veterans. Wilker was president of the Kennedy Center in Washington for ten years and is recognized for repositioning and reprogramming it as one of the leading venues in the U.S. Becker also is known for his years with the Kennedy Center as general counsel and attorney to American producer Roger Stevens.

The Kodak Theatre was previously run by AEG Live. –by CelebrityAccess Staff Writers