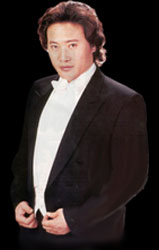 With Luciano Pavarotti's impending July 5 performance at the Llangollen

International Musical Eisteddfod and his announcement to retire from the Metropolitan Opera stage next year in gala performances of Puccini's Tosca, his longtime concert producer Tibor Rudas has already found a worthy successor: Chinese tenor Dai Chaing, set to make his Covent Garden debut in 2004, also singing the role of Cavaradossi in Puccini's explosive melodrama.

A veteran artist in his native country but a virtual unknown in the West, Dai Chang first met Rudas in Beijing, where in 2001 the 3 Tenors sang in the Forbidden City. Rudas immediately worked to introduce him to the West, and now the young tenor from He Bei has already been engaged by the Portland Opera, where he will sing Calaf in Turandot in November, as well as by London's distinguished Royal Opera House for his debut next summer. A CD release is planned for next year.

Tibor Rudas had presented many distinguished artists prior to first working with Pavarotti in 1983, but in the wake of their first concerts together a new team and great friendship were born, a relationship which has lasted for twenty years and almost 300 concerts.