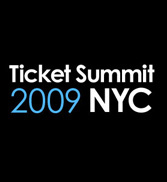 NEW YORK (CelebrityAccess MediaWire) — Ticket Summit 2009 is shaping up and this year's event will feature a selection of marquis speakers along with dynamic panel discussions and vendor exhibits. High-profile attendees include representatives from Google, the NHL and the NCAA, in addition to companies representing the hospitality, ticket, entertainment and technology industries.

Mark Wienkes, financial analyst from The Goldman Sachs Group, Greg Bettinelli, executive vice president, business development and strategy at Live Nation, and Derek Palmer, chief commercial officer of Tickets.com, will address the overlap between the primary and secondary ticket markets in a panel titled "The New Paradigm." This session is scheduled for Wednesdsay, January 7th, and is designed to educate summit attendees on how the blurring line separating two ticket markets will affect a range of professionals in both sectors.

Bettinelli is responsible for the strategic direction and partnerships for Live Nation's ticket business. Prior to joining Live Nation, Bettinelli was Sr. Director of Business Development at StubHub where he spearheaded the company's partnership with Major League Baseball. Before transitioning to StubHub, he led eBay.com's Event Tickets and Media businesses and was a catalyst in eBay's acquisition of StubHub in 2007.

Derek Palmer is the executive behind Tickets.com's operational and sales organizations. Over the course of his 15-year tenure with Tickets.com, Palmer has launched clients such as Times Union Center, formerly known as Pepsi Arena, I.M.P.'s 9:30 Club, Washington Nationals, Pittsburgh Pirates, and The Wolf Trap Foundation for the Performing Arts. Additionally, he has major event experience working as ticketing manager for the 2000 Olympic Games in Sydney, Australia and the 1996 Olympics in Atlanta, GA. Palmer holds a Bachelor of Arts in English Literature from George Mason University.

The conference is set to take place next month from January 6-8 at the Waldorf Astoria Hotel in New York City. For more info, check them online at ticketsummit.org. – CelebrityAccess Staff Writers