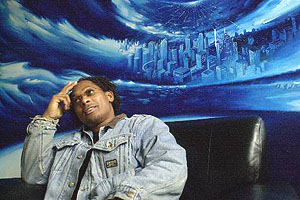 The City of Detroit has awarded High Tech Soul the contract to produce
MOVEMENT 2003 – Detroit's Electronic Music Festival at Hart Plaza over Memorial Day weekend, May 24-26.. The festival draws more than 1 million visitors to Detroit.

"Derrick May's expansion of ideas, his understanding of the industry, and the partners he brought to the table excited not just me but my entire team," said Detroit Mayor Kwame M. Kilpatrick.

The festival line-up will be announced in March.

The renowned international mime Marcel Marceau will begin an historic final tour of the United States on March 2 in Clearwater, FL, bringing his beloved character Bip before three generations of theater-goers, many for the last time. After 47 years of touring almost annually in the US, often extensive tours involving communities as small as Valdez, Alaska, Marceau will limit his activities after this year, focusing on special engagements and his work as a teacher and visual artist.

The Marceau tour will begin end in New Mexico and include 14 states and 19 cities, following which he will travel directly to Hong Kong, Seoul and Singapore. During the tour Marceau will celebrate his 80 birthday on March 22, in characteristic fashion offering two performances on that date for audiences at Philadelphia's new Kimmel Center. A writer, painter, illustrator, teacher, UN goodwill ambassador and cultural icon, Marceau is best known for his touching non-verbal reflections of the universal joys and sadness of people of every age and background. Much of Marceau's appeal is in the simplicity of his presentation, yet the uncompromising honesty with which he reflects man's triumphs, emotions and foibles.

Best selling authors, including Scott Turow, Amy Tan and Dave Barry, plus "Simpsons" creator Matt Groening — AKA the Rock Bottom Remainders — kick off their first West Coast "Fire In The Belly" tour in Seattle, April 23, followed by San Francisco and Los Angeles. The tour is aimed to raise funds for the America Scores after-school programs in the three cities.

Bruce Springsteen says of these authors-turned-rockers: "The band is not too bad. It's not too good either! But if it gets any better it'll ruin the whole thing."

Money raised at the concerts is for America Scores, a national after school creative writing program for inner city kids. The tour provides for the programs in the three newest cities.

Lead guitarist, author/humorist Barry says: "For this first West Coast tour, we considered learning how to tune our instruments but we're afraid that will destroy our unique sound! We've been called more frightening than a Stephen King novel but it's a chance to goof off for a good cause every year."

McGuinn observes: "Working with the Remainders has added a new meaning to performing."

ATLANTA (AP) — Hip-hop festival organizers met Thursday with Atlanta city officials in another effort to get a permit for a three-day event in April at the Turner Field parking lots.

The city turned down a bid Wednesday from music mogul Russell Simmons and his group, the Hip Hop Summit Action Network, saying the application had inconsistent crowd estimates and no proof of insurance.

Eminem and Nelly are among the performers scheduled to perform. The event would begin April 11 and feature seminars and other rap acts.

"What's going on today is we're giving the city a response to the issues the city raised yesterday," Chavis said in a telephone interview from New York.

If the Turner Field venue did not work out, they would seek another site, Chavis said, perhaps Philips Arena or Lakewood Amphitheater.

"It's not a case of a shortage of facilities," said Chavis, who is set on the April 11 weekend date. "If we don't use the Turner Field site, we believe there are other available and viable venues for us to go forward."

Atlanta Mayor Shirley Franklin's chief of staff, Greg Pridgeon, said Wednesday he did not think there was enough time to prepare for the event.

"I have been around for a long time, and I understand what works well and what does not," he said. "I cannot issue a permit at this time, because with hip-hop being a popular worldwide musical product, it takes planning and effort. With this coming in 30 days, the obstacles are very substantial."

In denying the application, Pridgeon cited inconsistencies in how many people organizers expect to attend. Estimates fluctuated from 35,000 to 200,000.

Jody Miller, spokeswoman for the event organizers, said they consistently told city officials to expect more than 35,000 people. She said they would revise the application to a daily crowd estimate of 66,500.

— Insurance had not yet been purchased, although an application was submitted.

— Failure to show approval to use the Turner Field parking lots, which must come from the Atlanta Braves and the Atlanta-Fulton County Recreation Authority. Organizers said they received authorization March 5.

— Failure to specify which streets would have to be closed, and where alcohol would be sold.

The Hip Hop Summit Action Network was founded in 2001 by Simmons and Chavis, a former head of the NAACP. The group is a coalition of hip-hop artists, music industry executives and civil rights activists.