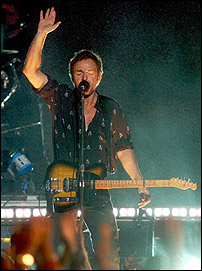 (CelebrityAccess News Service) — Bruce Springsteen and the E Street Band will play New York's Shea Stadium October 1 and 3 for the final stop of their 2002-2003 world tour. It will mark Springsteen's first ever performances at Shea; sources indicate that a few shows might be added.

When Springsteen and the E Street Band perform at Shea Stadium, they will have played 119 concerts in 82 cities around the world, selling more than 3 million tickets since the tour began August 7, 2002, in East Rutherford, NJ.

According to Springsteen's longtime manager Jon Landau, "Over the last 30 years, New York has been central to Bruce's performing career. He played on the same bill with Bob Marley at Max's Kansas City in 1973, did his legendary Bottom Line shows in New York in 1975, played Madison Square Garden for the first time in 1978, and ended his 2000 tour with the E Street Band with 10 shows at Madison Square Garden. So, it's extraordinarily appropriate that the grand finale of this most successful of all Bruce Springsteen and the E Street Band tours will take place at New York's Shea Stadium. I'm sure they will be nights to remember."

The dates will be presented by Radio City Entertainment and the New York Mets. "The New York Mets are thrilled that Bruce Springsteen and the E Street Band will make their final stop of their world tour at Shea Stadium," said Dave Howard, Mets executive vice president, Business Operations. "We are excited to continue the long-standing tradition of bringing the finest artists in rock-n-roll history to Shea."

"It's only natural that this historic event will come about, since it takes advantage of two terrific partnerships – the New York Mets and Madison Square Garden, and, of course, the strong relationship between Madison Square Garden/Radio City Entertainment and the incredible Bruce Springsteen and the E Street Band," said Joel Peresman, executive vice president, Radio City Entertainment.

The Beatles played Shea Stadium in 1965, marking the first major stadium rock concert on U.S. soil. Springsteen and the Band's shows will mark the first major rock concerts at Shea since a 1992 show there featuring Elton John and Eric Clapton. The Rolling Stones and Jethro Tull have also performed at Shea Stadium. –by Bob Grossweiner and Jane Cohen

NEW YORK (AP) — The rock group Poison is promising to finish their tour, even though a lot of their equipment has gone up in smoke.

In a statement, the band said one of their transport trucks caught fire at the rear axle while they were traveling through Scott County, Iowa, early Sunday.

The driver and crew tried to put out the fire, until they found out there were pyrotechnics on the truck. They cleared everyone away until local fire crews arrived.

The truck was engulfed in flames and the highway was shut down.

The band lost their stage, sound system and several instruments.

They still performed in Detroit on Sunday and outside Nashville Monday night.

(CelebrityAccess News Service) – Lynyrd Skynyrd filmed its concert at the AmSouth Amphitheatre in Nashville, TN on July 11 in front of 17,000 fans. Now that concert will be available as a pay per view event debuting September 19. "Lynyrd Skynyrd Lyve: The Vicious Cycle Tour" is presented by Beam &Cola and available to a potential 70 million households on both iNDemand cable systems and Dish Satellite Network. The nearly two-hour event–available in life-like High Definition–will air for approximately three weeks. –by Jane Cohen and Bob Grossweiner

“I'm so grateful to have this opportunity,” Heaton says. “I'm on the road all the time, but I'll be able to play in front of more people in eight nights than I normally do in six months. And I'm very excited to see Jewel, one of the most magnetic performers and versatile singers, do her show every night.”

Jewel founded the website www.soulcitycafe.com to support the development of independent artists and humanitarian projects. The contest began in January when singer-songwriters and bands from around the country were invited to send in their music to be reviewed by industry professionals. After six levels of elimination, the finalists were narrowed down to two solo artists and two bands per geographic region. A week of online voting (where voters could hear online music clips) followed to determine the winner from each region. The finalists from each region (five solo artists and five bands total) flew to San Juan Capistrano to play a show with Jewel at the Coach House and compete for the final opening slots. All of the performances were videotaped and posted online for another week-long round of voting by Jewel fans and fans of independent artists. Heaton won the solo artist category while The Susan Greenbaum Band was selected in the band category.

(CelebrityAccess News Service) – Hoobastank were forced to cancel a number of dates due to a motorbike accident in Myrtle Beach, SC involving guitarist Dan Estrin. "We were riding these little mini-motorbikes around the parking lot, and Dan drove into a dark roped-off area by the buses", said vocalist Doug Robb. "The rope caught him in the chest and he fell and hit his head pretty hard on the ground."
What seemed like a simple injury resulted in a small fracture in his skull which caused a blood clot that was pushing against his brain near his left temple. Fortunately, it was a simple surgical procedure in which the clot was removed. Estrin is currently in serious but stable condition, and he should fully recuperate in a few days.

A string of live dates have been canceled starting with the August 27 show in Charlotte, NC and ending in Memphis, TN's on September 2. The band will resume their tour with Die Trying and Letter Kills on September 4 in Camp Lejeune, NC.

The trio of American music pioneers will perform at the Blaisdell Arena on Oct. 25. Ticket information will be announced this week, according to a report in the Honolulu Star-Bulletin.

The performance will be the first in the islands for Little Richard, the flamboyant entertainer best known for his hits "Good Golly, Miss Molly," "Tutti-Frutti" and "Long Tall Sally."

Lewis first dazzled the crowd in Hawaii in 1958 with Paul Anka and Buddy Holly. His hits include "Great Balls of Fire" and "Whole Lotta Shakin' Going On."

Berry, the flashy showman behind "Johnny B. Goode," first performed here in 1957.

All three men are members of the Rock and Roll Hall of Fame.

(CelebrityAccess News Service) – Lollapalooza made its first-ever stop at the Cynthia Woods Mitchell Pavilion in Houston on August 10 and played to a sold out crowd of 15,245 people. "This is the first festival of this type to play the Cynthia Woods Mitchell Pavilion and we could not be happier with the turnout," said president and CEO, for the Center for the Performing Arts at the Woodlands, Jerry MacDonald. "The Woodlands is about providing diversified programming and Lollapalooza was a perfect fit"

The Houston Lollapalooza date was among one of the most successful so far on the tour. This was the fourth sell out of the 2003 season at the amphitheater. –by Jane Cohen and Bob Grossweiner

(CelebrityAccess News Service) – Slayer will be headlining the Jagermeister Fall Music Tour, produced and promoted by Clear Channel Entertainment, which continues its three-year relationship with the tour. Kicking off October 8 in Minneapolis, MN, it winds down in Los Angeles on November 29. Hatebreed is the main support act with Sweden's Arch Enemy rounding out the bill.

"Slayer has never done a sponsored tour, mainly because we never thought anyone was worthy enough to have their name along side ours," says Slayer's Kerry King. "But now, with Jagermeister willing to jump on board, we will conquer the US like no one has seen before!"

"Jagermeister is thrilled to be working with Slayer," concurs Rick Zeiler, director of Marketing and Brand Development for Sidney Frank Importing Co., Inc., the importers of Jagermeister. "We've been huge fans of the band for many years and to have them on our tour is a dream come true."

Rich Levy, vice president of Booking/ National Sponsorships for CCE, adds, "We are proud to be involved in the continuing growth of the Jagermeister Music Tour. This year's tour with Slayer is taking things to another level. It is always great to work with a brand that has an ongoing commitment to music as a marketing strategy and Jagermeister continues to be a leader in the field."

Each performance will feature a local opening act sponsored by the Jagermeister Band Program, the highly touted program designed to seek out and promote up-and-coming talent. Fans will also be treated to world premiere freestyle motocross footage from members of Metal Mulisha. And of course, the world-famous Jagerettes will be on hand along with the Jagermeister Buses, making sure everyone is having as much fun as humanly possible.

B.B. King Fans to Get Refund for Concert

(CelebrityAccess News Service) — B.B. King fans who couldn't attend his February 16 concert in Charleston because of a snowstorm will get a refund under a settlement between the promoter and the state.

Ticket-holders can either receive a refund or obtain vouchers to see any show promoted by CrossRhodes anywhere in the nation. Claim forms can be obtained from CrossRhodes. Forms must be returned to the promoter, along with the original ticket, within 30 days of receipt.

Concertgoers who didn't pick up advance tickets don't have to submit tickets.

McGraw said anyone who filed a complaint with his office will be sent a claim form.