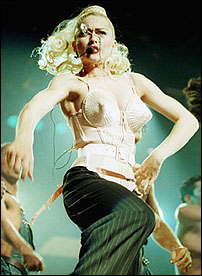 (CelebrityAccess MediaWire) — Madonna's upcoming "re-INVENTION Tour" is selling out like hotcakes. Originally scheduled to play in 12 major markets in North America with additional stops in Paris and London, the demand for tickets was so high that after two Madison Square Garden dates in New York sold out in record time, Madonna's manager, Caresse Henry, and Clear Channel Entertainment, added four subsequent performances (June 20-21 and 23-24) which were instant sell outs as well. An additional New York area performance was confirmed on March 30 for July 7 at Continental Airlines Arena in East Rutherford, NJ.

Additional shows have been added in Boston (June 30) after two sell outs at the Worcester Centrum. A fourth show has been announced in Chicago (July 15) after three sell outs as well, as more shows are currently being added in Fort Lauderdale, FL (July 29) and Miami, FL (August 2) after those markets went clean in record time.

Overseas, Madonna's two London shows at Earl's Court (August 18-19) sold out in 90 minutes leading to the confirmation of a third London performance at Wembley Arena on August 22. Her scheduled Paris show (September 1) goes on sale on March 31.

"Unfortunately, you have an unscheduled guest here at Moody's," the former Beatle said when he took the stage with a jazz trio late Monday night.

About 70 people crowded around as McCartney sang the jazz standard "Don't Get Around Much Anymore" with the George Souza Trio. Then, he asked the band to play the blues rocker "Kansas City" and he altered the lyrics into a tribute to "Tahoe City" — a neighboring lakefront town.

"I'm going to Tahoe City, going to get me some skiing," he sang as the patrons joined in for the refrain.

McCartney, 61, made a similar appearance last February at Moody's Bistro and Lounge in the old Truckee Hotel built in the 1870s. Last year, he improvised a tune he called the "Truckee Blues." He said Monday night that it was becoming his "annual residency."

"It was awesome," said David LaPlante, 34, Reno, who took in the scene with his wife, Jessica.

"I'm a little young to be a die-hard fan, but he's Paul McCartney, a living legend. … and he's sitting 15 feet away from you in a restaurant in Truckee," he said.

Adam Comey of Salt Lake City was in town for a ski competition his sports production company is producing at the nearby Kirkwood Ski Resort.

"There was sort of a buzz in the whole room but I was clueless until he got up on stage," Comey said.

"It's something you could never expect in your lifetime, to go to a small restaurant in Truckee, California and see Paul McCartney sing a couple of creative tunes. It was a blast," he said.

McCartney and his wife, Heather Mills, called ahead earlier in the day to Moody's co-owners Mark Estee, the chef, and J.J. Morgan, the general manager.

"It was an unbelievable repeat performance. They had a great time partly because we make sure everybody respects their privacy," Estee said.

The couple had been skiing at Tahoe resorts for about a week and attended the Prince concert Saturday night at the University of Nevada, Reno, about 30 miles from Truckee.

"They just kind of snuck him in through the kitchen," Souza said.

They ate dinner at a corner table next to the band before McCartney joined the trio on stage shortly after 9:30 p.m. for about 15 minutes.

"It was definitely a feel-good time by everybody. I think he seemed like he had fun," said Souza, who played a jazz rendition of "Yesterday" for the couple.

"They were probably there two hours. He was very gracious," Souza said. "I think the guy has a future in show business."

WASHINGTON (AP) — Michael Jackson is promoting the idea of staging a concert tour in Africa to help raise money to fight AIDS — if a California court where he faces child molestation charges will let him.

The entertainer said little at a Capitol Hill news conference where he was the main attraction, but Rep. Sheila Jackson Lee, D-Texas, elaborated on details of the possible tour, saying it would be held in late May or early June.

"This man is going to lead the global effort" against AIDS, said Rep. Bobby Rush, D-Ill., as Jackson stood to his right, lightly bowing his head and smiling softly to a throng of reporters and photographers.

Jackson Lee said that during a meeting in her office, Jackson was invited by ambassadors from several African nations to tour their countries and help raise money for AIDS prevention, treatment and education programs.

Whether the tour will take place is in doubt, though. Jackson surrendered his passport after he was booked in November on child molestation charges and will have to ask a judge for permission to travel outside of the country.

Jackson has pleaded innocent to the seven counts of committing lewd or lascivious acts upon a child under age 14 and two counts of administering an intoxicating agent to the child. A pretrial hearing is scheduled for Friday.

Despite the charges, Jackson was met by loud screams, applause and chants of "Michael, Michael" from fans who waited to get a glimpse of him as he was hustled by bodyguards through the narrow hallway of a House office building.

Wearing a satiny red jacket, embroidered across the chest and sleeves with silver sequin brocade and bearing purple-sequined military-style stripes on the shoulders, Jackson met for more than an hour behind closed doors with a small group of black lawmakers and the African ambassadors.

Later, his only words at a brief news conference were "That wasn't loud enough," when plans for a concert tour in Africa were announced and met with mild applause.

Jackson was scheduled later to visit patients at Walter Reed Hospital, where many soldiers wounded in Iraq are being treated. An association of spouses of African ambassadors is scheduled to present him with a humanitarian award Thursday for his contributions to fighting AIDS in Africa.

While fans in Washington eagerly welcomed Jackson, leaders of the 38-member Congressional Black Caucus were less enthusiastic. They had turned down his request to attend its meeting Wednesday, saying they were too busy dealing with legislative issues affecting black Americans.

"You guys are awesome," the 19-year-old pop singer told the enthusiastic crowd Thursday at Glendale Mall.

Some people waited several hours to see Lavigne perform songs from her upcoming CD and hits "Complicated" and "Sk8er Boi."

The half-hour acoustic concert was part of a 21-date tour.

Men At Work Frontman To Do One-Man Show

LOS ANGELES (AP) — Colin Hay, frontman for 1980s Australian band Men at Work, will star in a one-man theater show of storytelling and music in New York City this May.

The stage offer came after Hay appeared at the Aspen Comedy Festival in early March with a show that features new songs along with old hits such as "Down Under," "Overkill" and "Who Can It Be Now?" in acoustic-heavy performances that blend music with comedy.

"I try to take people on some kind of journey during the show and people seem glad to travel with me. There is some kind of thread through it," he told The Associated Press Tuesday. "I based it on songs really, I'll think, `Where was I when I wrote this song and what was the song about?' The songs take me to a particular time."

The stage show, titled "Man (At) Work" and set for the Village Theatre May 4-15, comes amid a North American tour Hay has been on since February — his biggest concert series in nearly a decade.

For years, the Scottish-born Australian immigrant, who now lives outside Los Angeles, has recorded and released his music on his Lazy Eye Records label. He's now signed with Compass Records, which released his latest CD, also titled "Man (At) Work."

The ups and downs of his career are part of the stage show.

"You have moments where you're selling millions of records and think, `This is my life now.' And for some people that continues, but often what happens is — that doesn't happen. You get dropped from a record label, fall from grace, and then you think: `Now what?' How do you deal with that part of your life while you may continue to head for the lofty peaks?"

"LVE is excited about being part of the Las Vegas City of Lights Jazz Festival," said Pat Christenson, LVE president. "We hope that we can use the established brand of this event and turn it into one of the nation's major jazz festivals."

"This festival is a perfect complement to Las Vegas' diverse entertainment and special event roster," added Terry Jicinsky, LVCVA senior vice president, marketing. "And as the last several years have proven, the greater the diversity of Las Vegas' attractions, the more people are drawn here."

"Last year's Las Vegas City of Lights Jazz Festival was a tremendous success," said event organizer Schivo. "As the festival continues to gain momentum, it may even surpass top-rated European and U.S. spring and summer jazz festivals in terms of popularity. As it proves again and again, the Entertainment Capital of the World really knows how to put on a show."

The festival will offer free admission to children 10 years of age and under and a reduced ticket price of $15 to children between 11-18 years of age. Advance purchase general admission adult tickets are $54.55, VIP tickets, which include reserved seating, a private cash bar and executive toilets, are $97.50. All tickets are subject to tax and service charge. –Bob Grossweiner and Jane Cohen

Executives in the music industry will participate in this day long event that will serve as a forum for aspiring artists and business executives. Panelists include:


Panelists will discuss how they got their big break, the ups and downs of the business, and share tips on what they wish they would have known when they got started. Individual workshops include: Putting Your Team Together, Inside the Record Label, Current State of the Industry, Where Does the $$ Come From, and The Radio Business.

Participants in the Power 105.1 Music Summit will be able to network with people within the industry and discuss the latest trends and developments in the industry. CD's and demo handouts are permitted inside the venue only.
Ten of the lucky registrants will win a full day recording session with an engineer at Manhattan Center Productions. Tickets to the Power 105.1 Music Summit are $299 and includes breakfast and lunch.