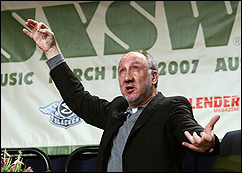 AUSTIN, TX (CelebrityAccess MediaWire) — Pete Townshend, keynote speaker at the 2007 South by Southwest festival in Austin, used his speech to introduce his new music concept Web site, The Method. Townshend first began working with the idea behind the Method in the early 1970s with music intended for “Lifehouse,” which eventually morphed into the Who’s “Who’s Next” album.

Launching in April, the online program, designed by Lawrence Ball, will allow site subscribers to “create their own musical composition by ‘sitting’ for the Method software composer, just as you would sit for a painter making your portrait,” according to a statement. Townshend previously used the program to inspire “Fragments,” the opening song on the Who’s new studio album, “Endless Wire.”

“You enter data about yourself, you share some stuff about how you feel, and you get back a piece of music,” Townshend said, according to Billboard. “There was no computer in 1971 big enough or powerful enough to do what I wanted it to do, and of course, there was no Internet.”

Townshend said the user will own a third of the copyright of the piece of music, and he hopes to one day hold a concert featuring several “Method” compositions. “It might sound like a seal or a plane going by,” he said. “It may sound terrible or it may sound beautiful. This is an authentic portrait.”

Townshend described his ongoing series of cybercasts with his partner Rachel Fuller, dubbed In The Attic. Recently, a New York edition of the event found Townshend playing Velvet Underground songs with Lou Reed in a tiny club.

“I’ve got a foot in the old establishment camp and a food in the new camp. Lou and I onstage at Joe’s Pub, looking into each other’s eyes…at one point, he said, ‘Is it okay to sit down?’ I said, ‘Sure!’ You don’t know how fucking huge that was to Lou Reed, to be told that he could play and sit down. He’s a couple of years older than me!” laughed the 62-year-old Townshend.