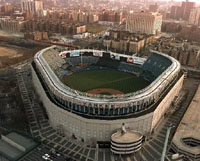 New York Yankee fanatic Mayor Rudy Giuliani of New York has signed a non-binding bill to build two new stadiums, replacing Yankee Stadium in the Bronx and Shea Stadium in the Queens, that mayor-elect Michael Bloomberg will decide upon in his term starting January 1, 2002. Each stadium will cost at least $800 million to build, which will no doubt inch closer to $1 billion each if the projects ever get off the planning boards.

Yankee Stadium, the House that Ruth Built, opened in April 1923 and is undoubtedly the best known stadium in the states if not the world. The proposal calls for a replica construction to begin in 2004 for a 2007 opening across the street from the current site in Macombs Dam Park, which in itself has huge amount of bureaucratic problems associated with construction in a city park. The proposed 47,000 capacity stadium means the venue will lose 8,775 in its new location but with luxury suites and club seats, the revenues will increase. With a nice percentage of games sold out or near sell out over the past few years, the fans of New York will be the losers in the long run.

Shea Stadium is relatively new having opened in April 1964. The new stadium will be erected on an adjacent parking lot, which is much easier to get through governmental channels than a new Yankee Stadium. A new Shea will resemble the long lost Ebbets Field, home of the by-gone Brooklyn Dodgers. The new stadium will have a capacity of 45,000; the 90 luxury suites and 5,000 club seats will partially offset the loss of 10,000 in capacity. The proposal calls for constuction to begin in 2003 with an opening in 2006.