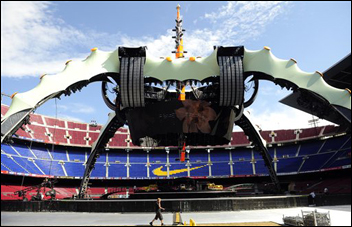 BARCELONA (VIP-NEWS) — Irish rock group U2 kicked off their first tour in three years yesterday (June 30), playing to 90,000 fans in Barcelona on one of the biggest concert stages ever built.


Over the next four months U2 will perform to an estimated three million fans in 31 cities across Europe and North America, with more dates expected to be announced next year.


The " U2 360 Tour" lives up to its name with a round stage, which fans will surround inside FC Barcelona's Nou Camp stadium.


Around 500 ticket holders slept outside the venue on Monday night hoping to grab a spot right by the stage when the doors open, local media reported.


That will be easier this time around, organizers say, with the new stage concept giving more fans a clearer view as well as allowing for more people, meaning lower ticket prices during the recession.


The U2 360 Tour is reported to be the group's most expensive to date, costing an estimated $100 million, but industry experts suggest it could be money well spent. The 2005-6 Vertigo tour earned the band $389 million.


Live performance is becoming an increasingly important source of revenue for major acts like U2 as sales of physical CDs declines sharply and online piracy remains rampant.


The stage, which takes 120 trucks to transport, is another grand statement from the four rockers who have won more Grammy awards than any other band.


On the Zoo TV tour, huge video screens overloaded fans with flashing images of pop culture. On the PopMart tour lead singer Bono appeared from inside a 12 meter glitterball shaped like a lemon.


The abiding visual memory on this tour is sure to be the "Claw," a four-legged "monster" that towers 50 meters over the band's heads and on which the sound system is mounted.


Bono, plus guitarists the Edge and Adam Clayton and Larry Mullen, Jr on drums will be showcasing their 12th studio album, "No Line on the Horizon."


Reviews of the record, which mixes trademark atmospheric guitars with more eclectic sounds from Morocco where it was partly recorded, were generally good, and it went straight to No. 1 in 30 countries including the United States and Britain.


Early sales in the United States, however, were sharply down on those for U2's previous album "How to Dismantle an Atomic Bomb," released in 2004. –According to Billboard