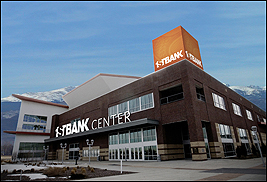 The venue, managed by Peak Entertainment, a partnership between AEG Live Rocky Mountains and Kroenke Sports Enterprises, features scalable audience capacities from 3500 to 6500 and is aimed at the mid-sized venue niche in the market. This is the second venture to evolve from the partnership between Kroenke and AEG and the two companies produce the Mile High Music Festival as well.

"We’ve taken great efforts in designing the 1STBank Center to combine the very best parts of arena production capabilities with the décor and soul of the world’s great theatres" said AEG's Chuck Morris. "This is a completely unique design approach for a venue of this size – fans and talent alike are going to want to come here."

Formerly known as the Odeum, the upgrades to the remodeled 1STBank Center include improved sightlines, more open spaces, including bar areas, that had formerly been separate from the main room, and a new 130 foot wide state-of-the-art video screen above the stage.

"When we first took it over, I could tell that this building had great bones but no ambiance," Morris told CelebrityAccess. "We're building an outrageous stage and lighting system – we can project any image we want on the white curtains around the stage."

The changes to the building aren't just in public areas either. The project's Architects leveraged Morris' extensive production experience in the design process as well.

"We were very involved (in the design process.)" Morris said. "In layman's terms, the place was built for sports and occasionally music. We've built a theatre inside with a semi-permanent stage that can be easily converted to support sports events. Its got a great load-in, an amazing sound and light system that's been tuned to the room and with our hanging capacity, we can handle just about anything — it's a modern building but with the decor of the world's great theatres."

AEG and Kroenke have also taken steps to try to address one of the primary complaints about the original Odeum – customer access. The original venue was criticized for parking and congestion problems due to narrow access roads and a lack of available parking spaces.

"We've improved parking with help from Broomfield, adding 2,800 parking spots and we've added new signage in the parking lots." Morris said. He also noted that the city is building an RTD bus stop at the venue and that the state is planning to add a light rail station close by.

"I grew up to going to Brooklyn Dodgers games and watching roller derby at the Brooklyn Armory. I love roller derby and when it started happening again with girls' roller derby, I thought it could be a big thing. When we made the Broomfield deal, I started meeting the Roller Dolls. I chased them because I thought that we'd have a room that would be a perfect fit for the sport," Morris said.

Starting in 2011, the 1stBank Center will also become home to Colorado's Music Hall of Fame, a non-profit organization whose mission is to educate and to raise money for the Music School of the University of Colorado. To be curated by longtime Colorado rock critic G. Brown, the museum will recognize artists who have influenced Colorado's music scene, including Joe Walsh, Big Head Todd & The Monsters, Firefall, Dan Fogelberg, Poco, The Subdudes, The String Cheese Incident and The Fray among others. Plans are also in the works for historical locations such as Red Rocks Amphitheatre and Caribou Ranch to receive recognition. – CelebrityAccess Staff Writers