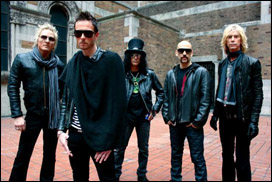 SYDNEY (CelebrityAccess MediaWire) — New Yearâ€™s Eve with them at New York Cityâ€™s Hammerstein Ballroom. The Grammy-winning bandâ€™s set will consist of material from their current and critically acclaimed â€œLibertadâ€ and their three-million-selling debut album â€œContrabandâ€, as well as songs from the membersâ€™ respective bodies of work.

The New Yearâ€™s Eve concert will follow Velvet Revolverâ€™s Wednesday, December 12 headlining show at Los Angelesâ€™ Gibson Amphitheatre. The Los Angeles performance â€” with Alice In Chains â€” was originally set for Friday, October 26 at the outdoor Verizon Wireless Amphitheatre in Irvine, CA but was postponed due to the devastating Southern California wildfires. In an effort to help the victims of these fires, a limited edition Velvet Revolver t-shirt will be sold at the show, with part of the proceeds going to Southern California fire victims. In addition, the Red Cross will have an informational booth at the show with details about how people can help.