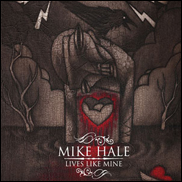 Wednesday night (4-8-09) at 8:30pm Eastern time, we announced to the world that we were giving away Mike Hale's new album, "Lives LIke Mine" away for free digitally. The announcement was initially made through Mike's column on Punknews.org, For those Still Standing. Since that post, I have sent out press releases to some of our closest contacts at various webzines. Mike's booking agent, Amy at Rockport, has been sending the news to promoters all over the states. Coody from Ninja Gun (Mike's supporting act on this upcoming tour) sent out a bulletin through their Myspace. We also sent out a bulletin and blog through Mike Hale's myspace. We posted the announcement on the Suburban Home site, the Vinyl Collective site, our MySpace pages, our message board, and this morning we sent out a newsletter to our email list of around 25,000 subscribers. After 24 hours, what do we have to show for it?