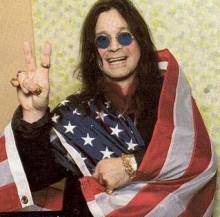 The USO is proud to announce the “Ozzy Osbourne” tour, which will make several stops in the Pacific region this month. Once there, Osbourne will perform for the troops, meet with the service members, pose for pictures, tour facilities and sign autographs. This will be Osbourne’s first USO tour.

Ozzy Osbourne’s 32-year career has been highlighted by numerous accolades. In 1970, Osbourne joined the pioneering metal group, Black Sabbath. Their self-titled debut album was certified platinum in 1970. Osbourne releases an additional nine albums with the group, before leaving the band in 1979. His first solo album, “Blizzard of Ozz,” goes quadruple platinum in 1981. Over the next few years, he sells over 70 million albums, performs at Live Aid and performs at the Russian Peace Festival. In 1993, Osbourne was honored with the Best Metal Performance Grammy for “I Don’t Want to Change the World.” He launched the popular OZZfest in 1996, which was the first national music festival featuring hard rock music and up-and-coming artists. This summer the tour featured Crazytown, Godhead, Linkin’ Park and Papa Roach. Osbourne received another Best Metal Performance Grammy for Black Sabbath’s “Iron Man.” In 2001, Osbourne appeared in the Adam Sandler movie “Little Nicky,” and won the MTV Movie Award for “Best Cameo.” He recently released his first solo album in six years, titled “Down to Earth