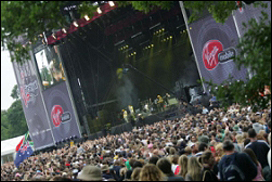 JOHANNESBURG, South Africa (VIP-NEWS) — Virgin Group has confirmed the launch of the V Festival brand in South Africa. Snoop Dogg, Maroon 5 and OneRepublic will all appear.

Known as Virgin Festival by Virgin Mobile, the event will be held in Johannesburg Dec. 13 and Cape Town Dec. 16. Promoter Cape Town-based Big Concerts is expecting it to draw an audience of 60,000 across both cities.

In a statement, Sir Richard Branson said the launch of Virgin Festival was a continuation of his policy of bringing Virgin Group products to "a country I love."

"In the last 12 years we have launched eight successful businesses in SA," he said. "We have over one million customers and 4,500 staff, and it just makes sense to launch Virgin festival here — especially as South Africa has some of the most beautiful Greenfield sites in the world. Live music is growing — it's a great way to connect with youth and it is something to be positive about."