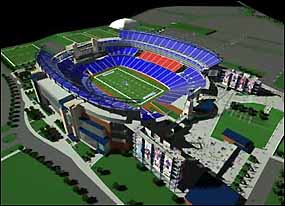 Foxboro, Massachusetts-AP — What's in a name? For the New England Patriots the answer is: a lot of money.

Practically every strip of asphalt and concrete at the team's new stadium — C-M-G-I Field — is named for businesses that have bought naming rights.

They enter through gates named for FleetBoston Financial or Internet auction firm u-Bid.

They kick back in the Fidelity Investments luxury clubhouse.

The team won't say how much it got for the naming rights. But it appears to have broken some new ground in Foxboro.

An attorney who specializes in sports deals tells the Boston Globe he's never heard of selling naming rights for a parking lot.

The team wanted to call the clubhouse access road Fidelity Way-dot-com. But local officials put the kibosh on that.

for the Arts in Germantown, Maryland is staging its very first concerts for its outdoor concert series, which runs July 10 – August 31. It will stage its grand opening in October.

"The concert series is the first of many great arts experiences that BlackRock will bring to Montgomery County and the surrounding community in the coming months," said Interim General Manager Marilyn Balcombe.

"With this diverse group of musicians, there will be something that appeals to everyone," said Balcombe.

The BlackRock Center for the Arts, a 34,000 square foot facility, will include theaters for the performing arts, an exhibition gallery, a children's art and activity studio, outdoor performance space and educational studios for art, dance, music and literature.

two dozen people were injured — most of them slightly — in a mosh pit stampede while rapper Eminem was performing Saturday night at RFK Stadium, officials said.

One man suffered a heart attack during the melee and was taken to a local hospital, District of Columbia fire spokesman Alan Etter said. His condition was unavailable.

Four others were taken to area hospitals with injuries not considered to be life-threatening, he said. The rest were treated at the scene for less serious injuries.

"There were fights and a lot of pushing and shoving," said Brent Turner, 17, of Damascus, Md., who said he witnessed the disturbance.

The two-day concert sponsored by a Maryland radio station included a number of acts on several stages. Eminem resumed his performance after a brief delay, while police calmed the crowd, and the concert was to continue Sunday as planned.

in Farmingdale, NY is expected to sign a 10-year deal with the Morey Organization in Garden City, NY, which will book shows and invest $1 million in venue improvements. The Morey Organization, which owns three radio stations and the Vanderbilt Entertainment Night Club, had a trial run at the amphitheater last year and turned an $8,000 profit for the town. According to John Caracciolo, president of Morey Organization, $400,000 has already been invested in improvements to the sewage system, new bathrooms, sound and lighting systems and 200 new permanent seats, with 500 more to be added at the end of this season.

Brookhaven Supervisor John Jay LaValle told Suffolk Life Newspaper, "It will be to their benefit to make these improvements early in the agreement so they will see the benefits," noting that he has "been a proponent" of bringing in Morey Organization. "They have the ability, track record and expertise to promote this facility and to make it work. They are committed to doing $1 million in capital improvements, and in addition, Brookhaven at the very least will be matching that money over 10 years."

"We have produced over 350 shows in the last five years, and in Brookhaven we will do 23 shows for the summer 2002 season," Caracciolo said, who added that the town will have the right to schedule eight events. "This is a unique partnership between the town and private industry … and we will be working very hard to bring big sponsorships and to produce shows at a more professional level, because our goal is to keep ticket prices at a cost not to exceed $20 each over the 10-year period."

Previously, the amphitheater turned no profits for the town, but that will now change. The town will receive a $7, 500 flat fee for every event Morey stages, another $10,000 security fee pershow, and the balance of $1 million in improvements. Caracciolo said he will also be working with the town to help them produce their shows on a more professional level. In addition, the town will receive percentages from the Morey-run concessions as well as a percentage of sponsorships.

"We do everything and do not sublet anything out, and we're bringing the entire facility up to code," Caracciolo said.

The amphitheater expects to have permanent seating for a 5,000 capacity.

Adelphia Business Solutions Inc could lose its naming rights for Nashville's Adelphia Coliseum if it doesn't make good on an overdue payment on the $2 million a year deal.

A motion was filed by a group of entities — Tennessee Football, parent company of Tennessee Titans, Cumberland Stadium, Tennessee Football, Cumberland Promotion Enterprises and Dream Suites — to force the telecommunications firm to make its $500,000 quarterly payment due May 15 or assure it will make the payment. If unable, the above companies want the option to remarket the naming rights.

Adelphia Business Solutions filed for Chapter 11-bankruptcy protection in March. It is now in post-petition day default, the filing says.

The cost of a

ticket for events at the city-owned Blue Cross Arena at the Community War Memorial in Rochester, NY will increase by 25 cents in July, according to the Democrat & Chronicle.

SMG, which manages the facility, said it was losing too much money and wanted to rework its financial agreement. The city will use the extra money to help SMG.

In addition, the city also will pay $150,000 more a year in utility costs, reducing SMG's cost to about $300,000. Parking lot operations will also be turned over to SMG, who will be free to set their own parking fees.

Entertainment's Don Law and Massachusetts environmental officials are butting heads about Law wanting to keep his FleetBoston Pavilion on South Boston's waterfront. Law is seeking an extension on his five-year state permit, which ends in 2004, to continue using the Wharf 8 site for his summer concert series. The problem is that environmental officials and others want to use the site to help preserve the city's diminishing maritime industry. Under state and city policies, Wharf 8 is designated for maritime use. Boston Mayor Thomas Menino however, supports an extension.

To combat the dissention, parent company Clear Channel Communications has offered to spend $50,000 a year on a program to familiarize schoolchildren with the Boston Harbor Islands.

Menino spokesman Peter Nagle told the Boston Globe that the city is in favor of the 5,000-seat tented pavilion because "at present nobody's approached the city on an appropriate maritime use for the site."

Another proponent of the pavilion is the Boston Redevelopment Authority, which owns the site. Spokeswoman Meredith Baumann told the paper that the pavilion is "consistent with our waterfront planning effort." Law's DLC Corp. pays $250,000 a year to lease the wharf

But the state has the last word on any extension since only it can issue a permit and it is holding its ground.

In the meantime, the state is looking for someone in the maritime industry to take over the space.