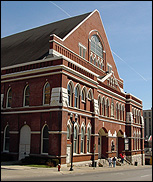 Walden is only the 7th person in the building's 115-year history to hold the title of General Manager at the National Historic landmark. Among the list of former GM's are Buchanan and noted local business woman Lula C. Naff who held the title for 35 years from 1920 to 1955.

A 16-year veteran of the Music business, Walden served from 1991 to 2001 as Vice President of Artist Development for Capricorn Records, a label co-founded by his uncle, legendary music impresario Phil Walden. At Capricorn, Walden was responsible for all aspects of the roster's artist development, including A&R, product management, marketing (national, regional & touring) & video production. Walden also oversaw all touring activities for acts ranging from rock groups Widespread Panic, CAKE, 311, and Gov't Mule to Country Artists Kenny Chesney and Hank Williams Jr. Most recently Walden served as the Ryman's Marketing Manager from 2003 to 2006.

"I am extremely honored and excited at being named General Manager of the Ryman Auditorium," says Walden. "The history that has transpired within these walls is extraordinary, and after 115 years, it continues to be one of the best places in the world to hear live music. I am very mindful of the fact that I have been entrusted with both preserving this legacy and continuing to grow it."