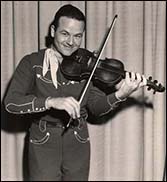 DRIPPING SPRINGS, Texas (CelebrityAccess) — Legendary western swing fiddler Johnny Gimble, who played with country music greats such as Merle Haggard and Bob Wills, died on May 9th in Dripping Springs, Texas, due to complications from several strokes he had suffered in recent years. He was 88 years old.

A native of Texas, Gimble started playing the fiddle early and was playing professionally in the Rose City Swingsters, a band he formed with his brothers by his mid-teens.

After a stint in the army during World War II, Gimble returned to Texas and music, performing with a number of groups, including Robert Bro's Rhythmairs and Bob Wills & His Texas Playboys, helping to define what would become known as Texas Swing.

Gimble eventually made his way to Nashville, working as a session musician and recording with a number of influential country music artists, including Merle Haggard on his Bob Wills tribute album, and Marty Robbins's #1 hit "I'll Go On Alone."

He would go on to a successful solo career, producing ten albums, and performing on radio programs such as Austin City Limits and Prairie Home Companion, as well as touring live with artists such as Willie Nelson.

in 2010, Gimble released his final album "Celebrating with Friends," which included collaborations with artists like Nelson, Haggard, Ray Benson, Dale Watson, Vince Gill and others.

His family has requested that in lieu of flowers, a contribution be made to the Health Alliance for Austin Musicians. Arrangements for a musical, memorial celebration in Austin are pending for some time in June. – Staff Writers