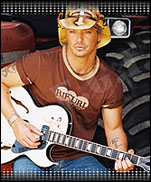 One grand prize winner and a guest will be flown to Detroit to attend the July 28 Poison show at DTE Energy Music Theatre. The winner will be treated to a "night of decadence," which will include an “all access” pass to hang out at the venue and party before, during and after the show, hotel accommodations at the bands’ hotel and the chance to party with Michaels and the band, including the ultimate after show party with Michaels on his bus. The winner and their guest will also be driven back to the hotel and be flown home the next day.

“This is the perfect contest," says Bruce Kapp, senior vice president of Touring, Live Nation. "The Poison show is going to rock. It’s their biggest production ever! I’ve been on Bret’s bus after a show, and I can tell you how decadent it is! And what better place to party than in then Detroit! Not only do the fans get to experience the show but they ultimately end up on Bret’s bus.”

The contest is open to all U.S. and Canadian residents 21 years of age and older. Grand Prize winner and guest must have proof of age and valid photo identification/passport for travel purposes. Bret Michaels, Bret Michaels.com and Live Nation are not responsible for any issues arising out of winner’s failure to secure valid travel documents. Winner agrees to hold Bret Michaels, Live Nation and all subsidiaries harmless in the event of sickness, accidents, riots, strikes, epidemics, acts of God, or any other conditions beyond their control. No purchase necessary.

For more information and to enter, go to BretMichaels.com. –Jane Cohen and Bob Grossweiner