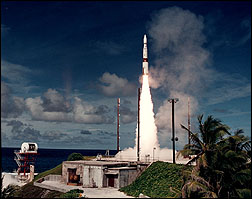 Jeff "Skunk" Baxter was the guitarist for two hugely successful 1970's groups: the Doobie Brothers and Steely Dan. Yes, the Dan was once a group before they stoically became a stubborn duo.

Today, Jeffrey Baxter (he has dropped the "Skunk" for seemingly apparent reasons) is a national advisor on missile defense. "It started with consulting for musical instrument companies," he told the New York Times. "I would read the defense magazines to find out what the latest technologies were and try to apply them to digital recording.

"A data-compression algorithm that might be useful in a military arena would have much the same utility in a recording arena," he said.

There is however, some music left in him up on the Hill. He notes that Senator Orrin Hatch is a very good songwriter, Congressman Collin Peterson a good guitar player and a really fine performer, and Chris Cox a fine lyricist. Baxter and Peterson put a band together a couple of years ago and did a benefit for the families of the Capitol police officers who were killed.