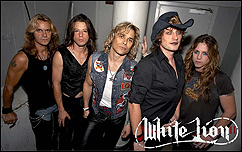 NEW YORK (CelebrityAccess MediaWire) — Organizers have confirmed that White Lion has been removed from this summer’s Poison/Ratt co-headlining summer tour, after a threat of legal action by the band’s former guitarist over the use of the band name.

Swedish glam-rock band Vains of Jenna have been selected to replace White Lion.

"On behalf of myself and White Lion, I would like to clear up the many misperceptions and rumors that have been created by Live Nation's decision to withdraw White Lion as the opening act of the summer 2007 Poison tour. While we are limited in what we can say about the issue because of pending litigation, we can inform everyone that Live Nation's decision was not based on any controversy over whether Mike Tramp has the legal right to perform as White Lion. Our information is that Live Nation's decision was based upon a threatened lawsuit by former White Lion guitarist Vito Bratta. Even though Live Nation believed Vito's lawsuit to be frivolous and had confirmed that Mike Tramp has the legal right to perform as White Lion, they did not want to spend 'one dollar' on litigation. Faced with the cancellation of a tour that was to begin within weeks, our attorneys went the extra mile to work out a deal with Vito Bratta to drop his threatened lawsuit but even with the threat of litigation eliminated, Live Nation continued on their ill-informed course of dropping White Lion from the Poison tour. Like myself, I know that there are many fans across the United States who are extremely disappointed by Live Nation's decision and we intend to use all options to fight this arbitrary and misinformed decision. Hopefully, there will be a day when decisions about staging a rock n' roll tour will be more about pleasing the fans and less about conservative and baseless corporate decisions. Unfortunately, as has been the case far too many times, instead of playing rock n' roll as planned, we are going to end up in court."

Despite their removal from the Poison/Ratt tour, band will fulfill all other scheduled dates this summer, including several headlining shows and the Rocklahoma Festival. –by CelebrityAccess Staff Writers