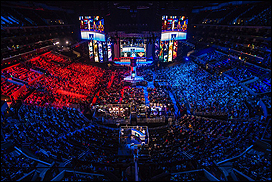 LOS ANGLES (CelebrityAccess) — WME|IMG announced that they have acquired Global eSports Management, a company which represents players and personalities across the professional gaming industry.

Tobias Sherman and Min-Sik Ko, who teamed up to launch the management company in 2013, will remain with the firm after the transition. Terms of the deal were not disclosed.

“WME-IMG is proud to work with the best in the business across sports, entertainment, media, marketing and fashion,” WME-IMG Chief Operating Officer Jason Lublin said in a statement. “G.E.M. is no exception. Toby, Min-Sik and the team bring unparalleled industry knowledge and an entrepreneurial spirit to our world-class digital talent offering. We see tremendous growth and opportunity in the eSports space, and we’re excited to bring this expertise in-house.”

G.E.M. currently reps commentators such as g Christopher “MonteCristo” Mykles and Robbert “Siv HD” van Eijndhoven, and players such as MinChul “MC” Jang. The acquisition represents the growing influence of the esports industry. In 2014, more than 32 million people tuned into the League of Legends finals, which were broadcast live from a sports stadium in Seoul, South Korea. This compares favorably with championship games of more traditional sporting events, such as Major League Baseball's World Series, which drew about 12 million viewers per game in 2014. As well, the championship match in 2013 was held at the Staples Center in Los Angeles and tickets to the event sold out in about an hour. – Staff Writers