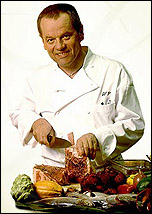 (CelebrityAccess MediaWire) — AEG has reached an agreement with Wolfgang Puck Catering & Events and Levy Restaurants to provide food services for all its sports and entertainment properties, including the Staples Center in Los Angeles. Levy Restaurants already was handling Staples Center premium dining, and now will take over general concessions from Aramark.

According to the Los Angeles Times, Timothy J. Leiweke, president of AEG, estimated the initial value of the 10-year deal at $55–$60 million a year, which could reach $100 million a year once AEG completes a series of projects by 2007, including the Nokia Theatre Los Angeles, the Millennium Dome Arena in London and the National Arena in Berlin. –Bob Grossweiner and Jane Cohen