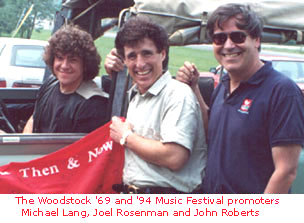 John Roberts, a co-promoter of the Woodstock Music and Art Fair in 1969 and a partner in its 1994 and 1999 revivals, died from cancer Saturday, October 27, at Mount Sinai Hospital in Manhattan.

In '69, the 24-year-old Roberts, along with Joel Rosenman, Michael Lang and Artie Kornfeld, helped define its generation when they produced Woodstock.

The three-day event, Aug. 15-17, 1969 was financed with inheritance money from Roberts and ticket sales, the latter of which brought in $1.8 million; the concert cost $3.1 million to produce. Their loss was nicely recovered with royalties from film and album spin-offs, and their ownership of the event name and trademark symbol of a dove on the neck of a guitar.

Roberts is survived by his wife Rona, and children Jennifer and Douglas of New York.