WASHINGTON, DC (CelebrityAccess) – Artist, producer, songwriter, and entrepreneur Pharrell Williams announced that his Something in the Water Festival (SITW) will take place in DC over the Juneteenth weekend (June 17 – 19). The festival, produced by Live Nation and Redrock Entertainment, will celebrate culture, art, and music, with three stages situated directly on Independence Avenue and its adjacent streets. 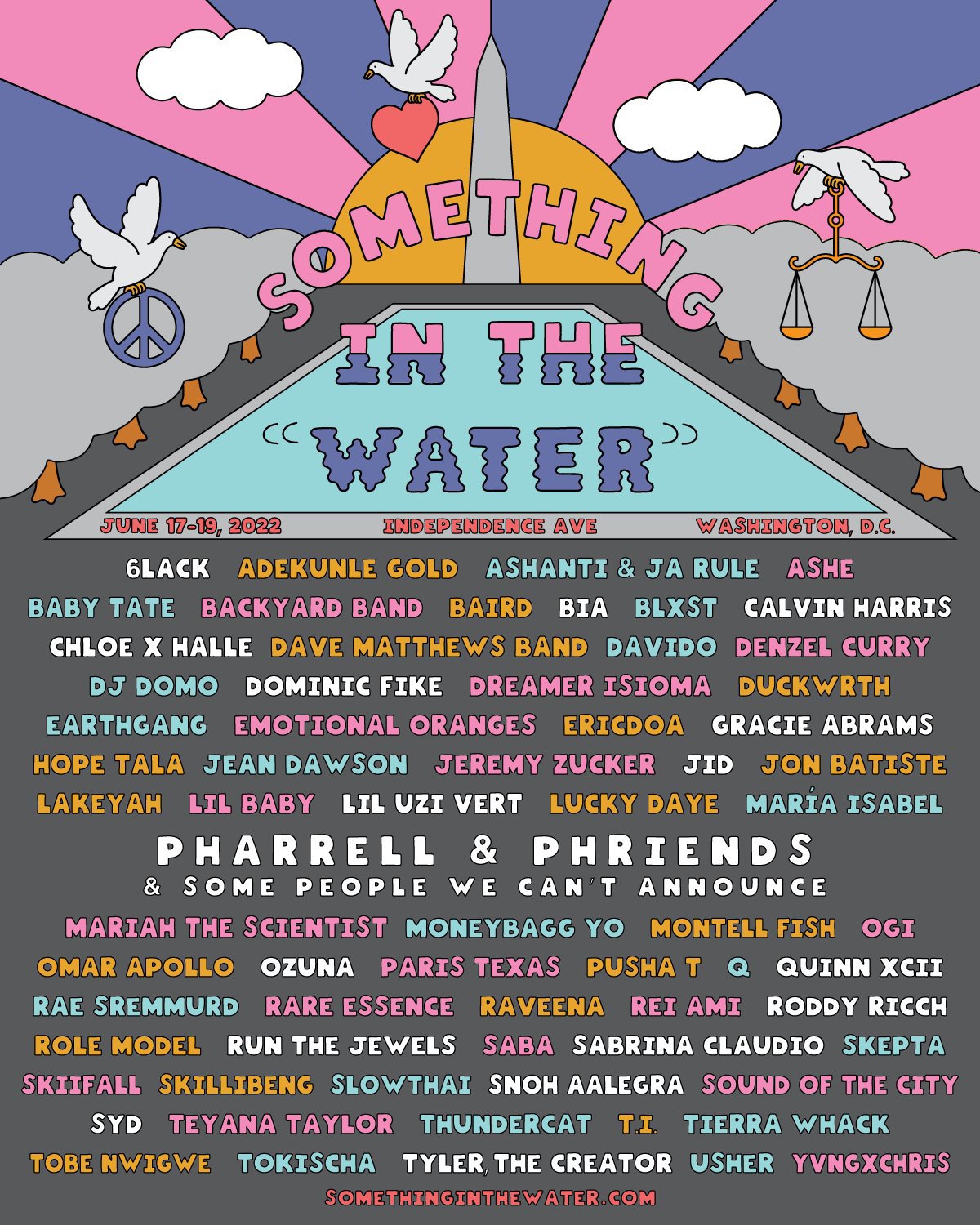 In 2020, Williams went on a mission to convince his home state of Virginia to recognize Juneteenth as a paid holiday. With success, he joined forces with other leaders, governors, and large corporations to pledge to make Juneteenth an officially recognized holiday.   The movement was powerful and culminated with President Biden declaring Juneteenth a national holiday.

Williams is bringing SITW to the nation’s capital, bringing together the DMV (DC, Maryland, and Virginia) on an important weekend in the country’s history to recognize that something has been flowing through the country’s soil for over 400 years. The festival has strived to fight systemic issues for historically marginalized communities related to opportunities in education, business, and jobs, and this year is no different. While the festival itself has relocated to Washington, DC, the impact of SITW on behalf of the 757 remains strong, with Hampton Roads engagements presented by Williams’ YELLOW non-profit announced at a later date.

SITW is a Black solution (LOVE) for a systemic issue, and this year we are taking our celebration to a higher platform – the nation’s Capital during Juneteenth Weekend.  We want to show the world that there is SITW across the whole DMV, and I want to continue to bring awareness to the greatness within these communities and invite large corporations to show up for the people. DC has always been a deep inspiration to me as a person and a musician.  It is the land where Go-Go Music was birthed which has provided so much for our people.  The goodwill we generate is a defining trait of who we are.  We will always have the hottest artists, but to pair that energy with these brands showing up for the community is what makes this festival a vehicle for change,” said Williams.

The festival, which was not held in 2021 or 2020 due to the COVID-19 pandemic, started in the Tidewater region of Virginia and Williams’ hometown. However, due to Virginia Beach’s response to the police killing of his cousin Donovan Lynch in 2021, Williams said he would no longer host the festival their city’s “toxic energy” when talking with city officials, with Williams calling out Virginia Beach Mayor Bobby Dyer specifically.

In an interview with the Washington Post, Williams stated that Dyer “said things that really hurt my feelings, and that’s just because his conversation with me was culturally tone-deaf. “When you signal to me that the loss of the festival – something that you didn’t want in the very beginning is more important than the loss of my cousin’s life, I don’t know how to help you.”

Tickets for SITW go on sale on April 30th at somethinginthewater.com.

UTA Promotes 54 Staff Across All Areas Of The Company