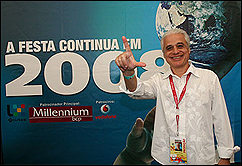 MADRID, Spain (CelebrityAccess MediaWire) — Organizers have confirmed that the 2008 Rock in Rio festival will be held for the first time in the Spanish capital of Madrid, staged over two weekends, from June 27 to 28, and July 4 to 6.

The festival will be held during May and June in Lisbon, Portugal, as well, marking the first time the giant concert experience will be held in two countries in the same year.

During an event launch last week, Rock in Rio founder Roberto Medina announced that $39 million will be invested in the Spanish festival, for which 200,000-square-meter “Rock City” will be built in the nearby town Arganda del Rey. The festival is expected to attract 100,000 people per day.

“We expect top international stars to perform, as in the past,” Medina said at the launch.

Organizers are planning to sign 20 international artists to perform on the World Stage, and 25 local start to play the Spanish Stage. There will also be an Electronic Big Top venue where 25 DJs will perform, and a Radical Zone set to include an ice-skating rink, a snowboard area, and other interactive entertainment.

So far, the only confirmed artist for the Rock in Rio Madrid is Miami-based pop star Alejandro Sanz, who has been appointed “social ambassador” for the event’s social cause, raising awareness of climate change and the need to reduce toxic gas emissions.

Artistic VP for the festival Gay Mercader, who sold his Gamerco concert production company in Live Nation in December, told Billboard.biz that Live Nation will not be involved in this festival.

“Part of the deal was that I would retain total independence,” he told the magazine. “Roberto Medina is the creator of all this, and there is no conflict at all. Neither Live Nation or anybody else will be deciding anything.”

The festival has been held a total of five times since its inception; in Rio de Janeiro, Brazil in 1985, 1991 and 2001, and in Lisbon in 2004 and 2006, and has attracted a total of four million fans. The 2006 festival featured performances by the Red Hot Chili Peppers, the re-formed Guns N’ Roses and Pink Floyd’s Roger Waters. –by CelebrityAccess Staff Writers