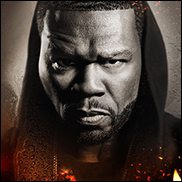 ST. KITTS, Caribbean (CelebrityAccess) — 50 Cent was arrested in St. Kitts on June 25th after allegedly using profanity during his performance. Profanity in public is a violation of the law on the Caribbean island.

The rapper was booked for saying the word “motherf—er” in front of 40,000 people during his hit song "P.I.M.P.," TMZ reports. According to 50 Cent’s DJ he did not have a clean version of the 2003 single. Reportedly the rapper did not pull the mike away to help diminish the word during the song.

As soon as the show was over officials took the rapper to the police station and booked him for using profanity in public. A representative for 50 Cent tells Billboard that he went to court Sunday morning, paid a fine and the matter is now settled.

,br>
"Mr. Jackson was only booked to host the show. When he arrived at the festival organizers asked him to perform, he obliged and used the DJ they had there. Unfortunately, they didn't have the clean version to his tracks, so there were profanities used during his performance," the rep confirms. "The show was a great success and he will make sure for future trips to St. Kitts that he leaves the "motherf—–s" in the United States."

In 2003, authorities also arrested DMX for using profanity during a concert on St. Kitts. Profanity on stage is a misdemeanor in this former British colony.

"There was a contract signed in which it was made very clear long before the arrival of the artists that there are laws in St. Kitts that do not take kindly to the use of indecent language on stage," information minister Jacinth Henry Martin said at the time.

DMX, claims he never signed a contract and would not have agreed to the censorship.