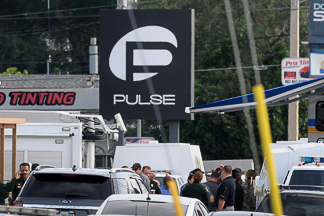 ORLANDO, FL (CelebrityAccess) — A lone gunman armed with a pistol and an assault rifle killed 50 people and injured 53 more in at a gay Orlando nightclub early Sunday morning in one of the deadliest mass shootings in American history.

Federal and local authorities are investigating the massacre as a possible terrorist attack and say the gunman may have ties to extremist Islamic ideologies.

Police Chief John Mina said the gunman fired the first shot about 2:02 a.m. at an Orlando police officer and then ran into the club, which held more than 200 people. Details about exactly what happened inside the club were unclear, but police said it was a hostage situation.

By 5:00 a.m., the police department's SWAT team opened fire, and when officers went inside, they discovered 50 dead, including the gunman, and 53 injured.

This is the deadliest mass shooting in the U.S. in at least 30 years. The massacre happened over a three-hour period.

"Tonight our community witnessed or experienced a very horrific crime," Orlando Mayor Buddy Dyer told media near the scene Sunday morning. "Many lives were lost, and many more individuals were impacted by witnessing the crime."

About 230 people were in the club when Mateen took scores of people hostage overnight between 2:00 a.m. and 5:00 a.m, when SWAT members exchanged gunfire with Mateen, Orlando Police Chief John Mina said. People hiding in the bathroom called 911 as the situation unfolded, he said.

Officers killed Mateen in in a shoot out and referred to him as a "lone wolf." He was carrying an assault rifle, a handgun and was possibly wearing an explosive "device." The Orange County Sheriff's Office hazardous device team is now searching the area.

About 30 people were "saved during the rescue," Mina said.

The Federal Bureau of Investigation is leading the investigation. Agent Ron Hopper said they cannot rule this out as an act of domestic terrorism and that the suspect may have leanings toward extreme Islamic ideologies.

Gov. Rick Scott is on his way to Orlando, his office said this morning. Scott has been in touch with local law enforcement and the FBI about the shootings.

Authorities said there is no indication of future attacks in Florida or across the nation.

Mina said the situation is not related to a separate shooting Friday inside The Plaza Live theater in Orlando, where a man opened fire, killing former NBC's "The Voice" contestant Christina Grimmie and himself.

In the early morning, dozens of emergency vehicles surrounded the chaotic scene at the club at 1912 S. Orange Ave. after the 2 a.m. shooting and rescue squads were transporting multiple victims to area hospitals.

Witnesses said they heard at least 40 shots fired inside the club.

At 5 a.m. authorities used an explosive device to distract the gunman, then authorities plowed through the club with a vehicle.

Police reported just before 6 a.m. that the shooter inside the club was dead. Mina said his officers exchanged gunfire with the suspect in two shootings. Nine officers were involved in the shooting and one sustained an injury to his head and was saved by his helmet.

Afterward, the Orlando Fire Department called for its bomb squad and hazardous material team to the scene after 3 a.m. Police K-9 dogs are searching the area around nearby Orlando Regional Medical Center with an armed deputy in head-to-toe military gear.

Pulse Orlando's posted a note to its own page that said, "Everyone get out of pulse and keep running." The popular gay bar was full of people at the time of the incident.

Emotional witnesses and family members of those who were in the club surrounded the area after shots rang out. One witness said the shooting lasted the duration of an entire song, according to the Orlando Sentinel

As this is a developing story please check back for updates. – CelebrityAccess