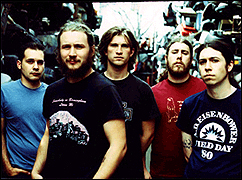 NEW YORK (CelebrityAccess MediaWire) — A Fein Martini, the management company for My Morning Jacket, Elvis Perkins, Flight of the Conchords and Good Charlotte, among others, has split up.

MMJ manager Mike Martinovich has formed his own company, Flatiron Management, and will continue to work with the wildly successful rock group, as well as Perkins, the Conchords, Nada Surf, Chad Perrone, Shivaree and Sarabeth Tucek.

Martinovich is joined at his company by Jamie Sampson and Ben Weber. Mike can be reached at mike@flatironmgmt.com.

Former Martini-mates Steve Feinberg and Matt Winkler have merged A Fein Martini with Simon Renshaw’s Strategic Artist Management, bringing their artists, including pop powerhouse Good Charlotte, with them. They can be contacted at sfeinberg@samanagement.com and mwinkler@samanagement.com. –by CelebrityAccess Staff Writers