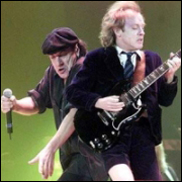 FOXBOROUGH, MA (CelebrityAccess MediaWire) — AC/DC makes a return to the US for the second leg of their successful Black Ice World Tour on July 28 in Foxborough, MA at Gillette Stadium.

The tour, in support of "Black Ice," the band's first album in over eight years, kicked off in 2008 and has been off and running in North America and Europe since then. Since its release, the album's hit multi-platinum status in 12 countries and debuted at #1 on charts in 29 different countries.

The band's latest single "Anything Goes," was filmed at the Palais Omnisports de Paris-Bercy in Paris, France on February 27th and is streaming now at www.aol.com.