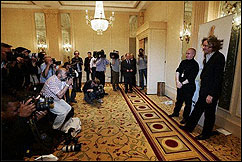 NAIROBI, Kenya (AP) — They'll be grooving to Coldplay in London, rapping along with Will Smith in Philly, dancing mbalax with Youssou N'Dour in Paris. But in African cities and villages, they'll be worrying about day to day survival — and questioning whether Western extravaganzas like the Live 8 concerts, however well intentioned, can help.

"This is not going to change the price of my rice or fuel," said Maimouna Dialo, a 37-year-old fruit vendor in the Guinean capital of Conakry.

Aid worker Houghton Irungu was less skeptical, saying the Live 8 concerts planned for July 2 in five Western cities will force leaders of the world's richest countries, meeting days later, to respond to calls to double aid to Africa, cancel its crippling debts and help its people trade their way out of poverty.

More than half of Africa's 870 millions people live on less than a dollar a day. Africa needs urgent help for its 12 million children who are orphaned by HIV/AIDS. About 30 percent of children across the continent are not in school. Debt cancellation and more aid would enable governments to use the extra funds on basic social services and on children, he said.

The concerts in London, Paris, Philadelphia, Berlin and Rome and a so-called Long Walk to Justice to follow were organized by musician Bob Geldof of Live Aid fame. Two decades after Live Aid, Geldof sat on an international commission chaired by British Prime Minister Tony Blair that proposed a series of fixes for Africa the G8 group of industrialized countries has been pressed to adopt.

For the walk, Geldof has urged hundreds of thousands of people to travel to Scotland, venue of the G8 summit, after the shows to press world leaders to endorse the Commission for Africa programs. The Commission for Africa has proposed erasing debt and trade barriers, doubling the West's aid to Africa, and encouraging African government's to be more democratic.

"People can relate more easily to the messages" spread by music, said N'Dour, the Senegalese world music superstar who popularized the hard-drumming, infectious mbalax style and who will perform at the Paris Live 8. "The message therefore spreads quickly."

U2 singer Bono brought the campaign for Africa to the European Commission Thursday, where he joined commission President Jose Manuel Barroso in an appeal to EU leaders to throw their political weight behind a plan endorsed by European development ministers to double the EU's $57 billion annual development aid for African and other poor nations by 2015.

"Africa and the problems of that continent can offer us a chance for Europe to re-describe ourselves, our value system," the Irish rock star said.

Irungu, a Kenyan who advises the British aid and development group Oxfam, said stars can influence politicians because they can marshal public opinion.

"It is estimated that between 2 billion to 3 billion people will watch the (Live 8) concerts, and with that kind of pressure it would be suicidal for the personal legacy as leaders of rich countries to ignore calls that emerge from their own political constituencies in G8 countries and from Africa," Irungu said.

"The plans for these concerts are bold and imaginative," Irungu said. "The Live 8 concerts are essentially designed to mobilize the population of the G8 countries in a way that the G8 leaders cannot ignore."

For most Africans, though, the Live 8 concerts are a preoccupation of the West. They have had minimum publicity in most of Africa, including in South Africa, whose President Thabo Mbeki will attend the G8 summit. A corruption scandal implicating his deputy, Jacob Zuma, is dominating newspapers, radio and television.

"But I suppose if they are trying to help us Africans, that's good, because life is tough and it isn't getting any better," Batala said.