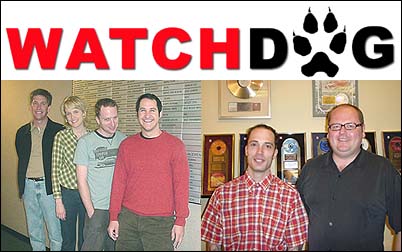 Led by Paul Shull, Watchdog East is dedicated to the discovery and development of emerging talent. It will provide vital booking, support and management functions for young artists and their teams, building its own fresh roster of agency and management clients. Watchdog’s Vancouver operation was launched in 2002, and books and co-manages a diverse roster of Canadian and international talent.

SLFA VP Jeff Craib tells CelebrityAccess “SLFA together with MFM is one of the only companies to date to place a large emphasis on discovering and aiding young artists.” “Watchdog’s staff is focused on enhancing opportunity for the best new talent out there, benefiting the industry as a whole. As talent develops and where appropriate, Watchdog will work with a variety of management companies to accelerate career development.”

Paul Shull started booking punk rock shows at the age of 18, before touring for 3 years as stage manager for popular LA band punk band Goldfinger. He currently manages The Miniatures (MapleMusic/EMI Publishing) and is working with several East Coast acts including Pimp, The Candidates and Hibakusha.

Watchdog currently co-manages Sondre Lerche, Kyprios, Stabilo Boss and Day Theory, and has a booking roster that includes 3 Inches of Blood, The Divorce, Honeysuckle Serontina and Speed to Kill.

Paul Reder, former Vice President of Entertainment for Park Place Entertainment, Northern Nevada, has joined forces as Managing Partner with Super Artists, Inc, a Los Angeles based Entertainment Firm. In his new role, Paul Reder will head several new divisions of the firm which will include a Talent Buying Division specializing in headline entertainment for casino properties, arenas, theaters, performing arts centers, fairs, festivals, and private events. Other divisions include a Sporting Events Division, and a Production Show division.

“I am extremely pleased and excited to be involved with Richard Super and Super Artists, Inc. I look forward to getting entrenched back in the Gaming and Talent Buying industry and to raise the bar of our clients entertainment product.”, says Paul Reder.

Paul Reder has been in the entertainment talent buying industry since 1983, and in the Casino/Gaming Industry since 1988. He was responsible for all talent negotiation, strategic direction, and entertainment operations for Caesars Tahoe, Reno Hilton, Flamingo Reno, and select other Park Place Entertainment venues. His gaming industry career has spanned 14 years, two years with Del Webb and 12+ years with Caesars and Park Place Entertainment. His areas of responsibility also included Sporting Events, Casino Events, Box Office Operations, Theatrical Production, and Nightclub Operations. He contracted well over 150 headline acts per year in venues ranging from 1,000 – 8,500 seating capacity.

Super Artists, Inc currently represents exclusively, headline live performance talent with artists such as Colin Mochrie, Kevin Pollak, Aisha Tyler, Anthony Clark, and Jeff Garlin to name of few. Rich Super, President of Super Artists, Inc., told CelebrityAccess “These new divisions will add a new dimension to the agency, allowing us to fully serve the needs of the properties who wish to have a dynamic and diversified entertainment strategy.” “I have known Paul Reder professionally throughout his gaming career and am delighted to have him as a partner in my firm” says Mr. Super. “He will bring a strong sense of comfort and integrity to our clients given his experience in the gaming and entertainment industry.”

After a decade in music, Waxploitation has launched it's own film company, Waxploitation Films, which will be dedicated exclusively to producing youth culture lifestyle oriented DVD titles primarily within the extreme sports and hip hop markets.

"This is the biggest move we'd made since we originally formed Waxploitation", says the company President, Jeff Antebi. "We've waited on the sidelines and assisted other companies with their film and television productions, but after meeting with a dozen distributors this quarter, we felt the time to step in was now. We already have built-in brand recognition in those two realms and an established marketing system in place. The first films we are doing take advantage of ten years of momentum".

The Waxploitation Films division, headed up by David Leslie, formerly of Vivendi Interactive, will focus primarily on the two lifestyle niches of hip hop and action sports. "It's an area we have the most experience in," says Leslie. "What makes this a dynamic effort is our access to the underground, endemic audience. If it's part of the next generation of entertainment, we are basically already there.”

Already in production are titles being co-produced with Carter Gibbs (founder of Grail Films and a legendary figure in action sports), E-Swift (hip hop icon and founder of Tha Alkaholiks and Likwit Crew) as well as with a host of young film makers that Waxploitation is intent upon developing as part of its long term plan. The first titles are expected to ship in the fourth quarter of 2003.

Immortal Entertainment has undergone a restructuring and will no longer include acting management and literary management divisions. Rather, it will focus on its music businesses, which includes the Vans Warped Tour, and grow the areas, according to Warped Tour creator, Kevin Lyman.