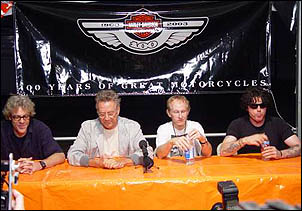 Los Angeles CA (November 5th, 2002) –The Agency Group is proud to announce that they have entered into a worldwide agency agreement to exclusively represent THE DOORS. It has been 28 years since the band last
performed as a live touring unit and there is a tremendous amount of anticipation surrounding this remarkable occurrence.

THE DOORS are original members and founding fathers:
RAY MANZAREK and ROBBY KRIEGER
And the line-up is rounded out by:
IAN ASTBURY (The Cult) and STEWART COPELAND (The Police)
The band will perform material that spans the entire discography of THE DOORS extensive history, including such classic songs as “Riders On The Storm”, “People Are Strange”, “Light My Fire”, “Roadhouse Blues”, “Break
On Through (To The Other Side)”, “L.A. Woman”, “Wild Child” and “Touch Me.”

Tom Vitorino manages the band and Dave Kirby of The Agency Group’s Los Angeles office will be booking the band in the United States and Canada. Neil Warnock, chairman of The Agency Group, based in London, will
represent the act in all international markets outside of North America. THE DOORS will be playing select shows in North America between now and spring 2003 with plans in place for a new album and DVD by the fall.

The band will also be appearing on some of the large festivals in Europe during June and July next summer.

Robby Krieger said: “Ray and I recruited Ian Astbury and Stewart Copeland, and guess what happened at the first rehearsal, we jelled."

“We are extremely happy to have this opportunity to work with one of the most important bands of all time,” said The Agency Group’s Dave Kirby. “I am one of the lucky few that have actually seen the band play and they are absolutely amazing! I honestly believe this could be the biggest story in music in a long while. This was simply NOT supposed to happen.”

“I feel deeply honored to represent an artiste of such legendary status” remarked The Agency Group’s Neil Warnock. “We plan on making each and every show they play, an event people will talk about for years to come”

"This is a dynamic new entity for the new millennium”, said Ray Manzarek. “We intend to play with the power, passion and poetry of the original 'Doors, but this is the new Doors, the 21st century Doors.”

"When I started out with Gary Burton and Keith Jarrett on my first roster, I made a promise to myself to sign only the best artists who showed a great deal of potential, acts that we knew we could effectively grow," said TKA namesake Ted Kurland. "The Slip is a band we feel has a great future here at TKA and in the business."

Co-manager Ted Kartzman noted, "We knew that The Slip generated a great deal of momentum on their own, but needed an experienced team to open the music up to a worldwide audience. My co-manager, Dave Margulies, and I have many
contacts on the grassroots touring circuit, but TKA is the
perfect agency to complement us due to their connections in the international music world. If given the opportunity, we knew The Slip had to work with Ted Kurland and his staff."