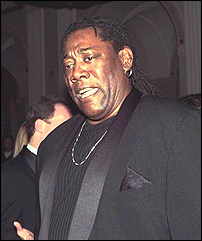 According to the venue the show has been rescheduled for March 2. No further word on the tour's remaining dates.

Stewart is going to give the Great White Way a try. The singer is currently putting together a musical, "Tonight's the Night," in London.

In an interview with "Extra," Stewart said he feels the best thing for Broadway is a combination of "ballads and up-tempo stuff."