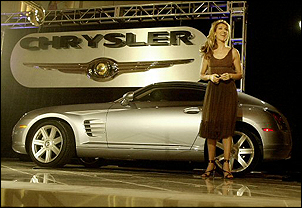 Celine Dion and Chrysler have entered into a multi-year partnership that will cover a wide range of marketing, promotional and advertising opportunities including personal appearances, special consumer promotions, dealer tie-ins, interactive communications, owner communications, retail television programming and recording tie-ins. The partnership launches in early 2003 with a Chrysler brand TV spot featuring Dion and her music.

With Chrysler's new designs, the corporation's strategy is to move the Chrysler brand more upscale by attracting younger, more affluent consumers. The partnership with Dion is a key component of that strategy, said Schroer.

"Celine Dion will play an important role in repositioning the Chrysler brand because she embodies the essence of all Chrysler vehicles — beauty, romance, sophistication and refinement."

"I'm truly excited about this partnership," said Dion. "It just feels right to be working with a group of men and women who are so passionate about what they do. The Pacifica and Crossfire are beautiful examples of that passion. And yet, as a mom, I expect to be spending a great deal of time behind the wheel of my new Town & Country minivan."

Event Ticketing Industry Gets Own Magazine

Entertainment Ticketing, a weekly news and analysis service for the event ticketing industry has been launched, and is available by email or through http://entertainmentticketing.com, which is under construction.

— New technologies and their likely effects on the industry.
— Major industry transactions, such as the signing of contracts to provide ticketing services to various venues, including the contract terms.
— Corporate developments, earnings, M&A activity, etc., involving companies in the industry.
— Admission controls and security concerns.
— Regular profiles of entertainment venues and their ticketing solutions.

Letterman Show to Be Aired on Radio

NEW YORK (AP) — Starting next week, David Letterman fans won't have to rush to their televisions to hear the night's Top Ten list.

"We feel this is a great opportunity for David Letterman's millions of fans to listen to the show while they're driving in their cars or away from their homes," said John Sykes, chairman of Infinity Broadcasting, on Monday.

The stations simulcasting Letterman will be in big cities, including New York, Los Angeles, Chicago, San Francisco and Philadelphia.

The deal is subject to regulatory approval.

World Wrestling Entertainment Incorporated's chief financial officer, Augie Liguori, and chief marketing officer, Julie Hoffman, have left the company. A company spokesman said that they were asked to leave as part of the need for a "change in direction." He said there were "things [World Wrestling] would like to see happen," and new management was needed for that to occur.

"As our organization continues to evolve, we seek to bring in new leadership in both the financial and marketing areas," said Chief Executive Linda McMahon in a prepared statement. "Our focus for the future will continue to be on strengthening our core product, and we believe that new executive talent will further this key corporate objective."