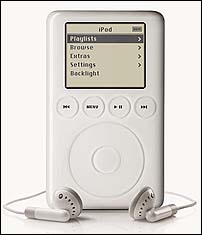 (CelebrityAccess News Service) – Apple has sold over two million iPods since its introduction, solidifying its position as the number one digital music player in the world. Apple has also made available a new 15GB model offering customers 50 percent more storage for just $299. All iPods work seamlessly with the iTunes digital music jukebox software and the pioneering iTunes Music Store, which has sold over 30 million songs, providing music fans with the best digital music experience on either a Mac or Windows computer.

"With over two million sold, iPod is unquestionably the leading digital music player in the world," said Steve Jobs, Apple's CEO. "By enabling music lovers to carry their entire music library with them at all times, iPod is clearly changing the way we enjoy our music, much the way the Sony Walkman did decades ago."

iPod and the new iPod mini are the only portable music players with Apple's patent pending Auto-Sync, an innovative feature that automatically downloads an entire digital music library onto iPod and keeps it up-to-date whenever iPod is plugged into a Mac or Windows computer using FireWire or USB 2.0. The ultra-portable iPod is designed with a solid-state "no moving parts" touch wheel and backlit buttons for precise, effortless navigation through thousands of songs; an elegant dock for easy syncing and charging with an audio line out for quick connection to a home stereo or powered speakers; and "On-The-Go" playlists so users can build a playlist right on their iPod.

More than just music, iPod is also great for listening to and keeping track of audiobooks; as a clock and alarm; for synchronizing and managing contacts, calendars and to-do lists; as a note reader for downloaded text- based information; and for digital voice recording and photo storage with optional Belkin accessories, allowing users to record hundreds of hours of audio and store thousands of digital photos on their iPod. iPod includes a rechargeable lithium-ion battery for more than eight hours of continuous music.