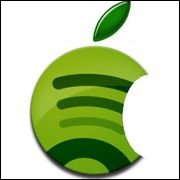 LONDON (Hypebot) – The blogosphere swelled yesterday with news that Apple might be in negotiations to purchase Spotify.

Since that report has turned up to be false.

According to a spokesperson from the company, no talks exist and the rumor is "completely untrue".

They added that they do not wish to be acquired by anyone.
One can only imagine the fear instilled into the record industry that their most loathed frenemy would gain more traction in the digital music space.

While others contended that, such an acquisition made sense, many more prepared to fight like hell and hope Apple didn't take over Spotify.