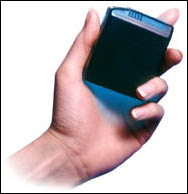 NEW YORK (CelebrityAccess MediaWire) — Arbitron made quite a stir this year when they announced that they are finally moving away from the diary method of monitoring users listening habits in favor of a technological solution dubbed the Portable People Meter, or PPM.

Formerly, randomly-selected Arbitron data reporters would keep a personal "diary" in which each person in the household would describe their daily radio listening habits over the course of a week. The week's data is then used by Arbitron to compile a statistical snapshot of the radio listening habits for that market based on demographic projections. The findings are then released quarterly in what is known as the "spring book" or "fall book" etc. The system is unwieldy however and requires active participation from the randomly-selected households and is while larger pools of respondents help smooth out statistical anomalies, the data is still reliant on the accuracy of the users reports. Additionally, users tend to record listening habits instead of actual usage.

In an attempt to address these shortcomings, Arbitron started testing their new ratings device in a few select markets this fall. Called the Portable People Meter, the Blackberry-sized device is worn by participants during the course of the day and listens for identification signals concealed within radio broadcasts that the PPM records and subsequently reports to Arbitron, ostensibly making a more accurate picture of the wearer's listening habits than the diary system previously afforded.

The device has already been deployed in some markets, most notably New York, Philadelphia and Houston with most major U.S. markets set for a phased 3-year roll-out.

Philadelphia and Houston were the first real tests of the device and interestingly, the information collected didn't quite jibe with the data collected in the same period using the older dairy method and the new data has already been driving change in the markets where its gone live. According to a story in the Wall Street Journal, Philly station WRFF 104.5 switched away from their Spanish language "Rhumba" format to Alt-rock when the new data showed it to be a more popular format in the city of brotherly love.

The differences in data demonstrated the growing problems that Arbitron was facing with their diary system. According to the WSJ, the diary sample size in Philly was a mere 380 people, while the new PPM system has been implemented with more than 1,500 people. Such a significant increase in the sample size an increase makes the statistics gleaned much more reliable and offers insight into demographics that would be less inclined to serve as diarists. Additionally, the PPM overcomes

The new system is already winning converts. Giant radio conglomerate Citadel Broadcasting announced last month that they had entered into a seven year contract with Arbitron for 41 stations, including 22 ABC radio outlets. "We believe that the PPM will significantly enhance radio’s accountability and reach, ultimately resulting in increased commitments to radio by advertisers," said Farid Suleman, Citadel’s Chief Executive Officer in a statement. – CelebrityAccess Staff Writers