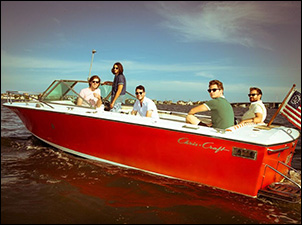 PHILADELPHIA, PA (CelebrityAccess) — Indie haze-pop quintet Cheerleader is set to play Haverford Spring Fest on May 1st in Haverford, PA. The band is also gearing up to kick off their upcoming East Coast tour with Paperwhite. 'The Escape Tour' starts on May 24th, in Cambridge, MA and will also visit New Haven, DC, Philadelphia, and New York City.


Cheerleader released their debut album The Sunshine of Your Youth last year on Bright Antenna Records, which features new single "A Million Ways." The album was recorded in Los Angeles with ten-time Grammy nominated producer Mark Needham, who is known for his work with artists such as The Killers, Walk The Moon, and Fleetwood Mac.


Like the best debut efforts, The Sunshine of Your Youth strikes a delicate balance between the intimacy of the band's early demos and a lavish ambience worthy of rock musicians with several albums under their belts. From the new wavey bounce of "New Daze" to the open-road anthem of "Do What You Want" to the closing lullaby "Little Bird," the band stays true to their sunny, optimistic name throughout, delivering a record full of hope, wonder, and undeniable warmth.


The hazy charm of Cheerleader first shimmered into existence at a Hartford, Connecticut middle school. Here, Joe Haller and Chris Duran cut their musical teeth in Duran's parents' basement, and their friendship and musical chemistry sparked a connection that survived the 2000s and colleges in separate states. Reconnecting in their hometown in 2012, Haller and Duran decided it was time to devote themselves to their music. "We sort of realized that, crazy pipedream or not, we owed it to ourselves to give it a shot," Duran says.


On a whim, the duo moved to Philadelphia to start compiling new material. In 2013, Haller and Duran self-produced and recorded a three-song demo in their apartment in downtown Philly under the name Cheerleader. To their surprise, the release of that three-song demo on SoundCloud led to features in NME and Nylon, some radio play, and a slew of SXSW invitations. Doors were opening quickly, but the duo was suddenly faced with the technical challenges of recreating their music live with only two members. Haller and Duran already knew local studio manager and multi-instrumentalist Josh Pannepacker from Philly's music scene, while mutual friends introduced the new trio to Carl Bahner (drums) and Paul Impellizeri (bass).


Cheerleader has since played alongside The Hold Steady, The Wombats, Knox Hamilton, Colony House, and Life In Film, with appearances at The Great Escape Festival, XPoNential Music Festival, SXSW and Firefly Music Festival. The band shows no signs of stopping, as they get ready to embark on The Escape Tour with Paperwhite. www.cheerleadersounds.com