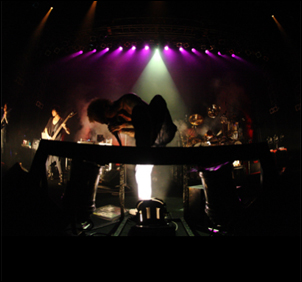 SHERMAN OAKS, CA (CelebrityAccess MediaWire) — Dir En Grey has conquered the Japanese rock scene with lyrics that convey sorrow, darkness and anger in modern society. The band has received international critical acclaim for their masterful translation of the lyrics to their dramatic and at times shocking stage show, which includes self-mutilation with bloodshed. Originally a “visual-kei” band, which emphasized their appearance, the band’s intensity and maturing sound have helped them create a loyal following across the globe as they moved away from the genre.

Dir En Grey–vocalist Kyo, guitarists Kaoru and Die, bassist Toshiya and drummer Shinya–became extremely popular almost immediately upon forming ten years ago, when they caught the attention of the CEO of East West Japan. Their debut was marked by the simultaneous release of three singles, all of which reached the Top Ten. Eight studio albums later, Dir En Grey are touring behind their latest release "Dum Spiro Spero" (While I breath for you non-Latin speakers). The album dropped on August 4th, 2011 on Free Will Records and charted up to #4 on the Japanese charts.

The album featured cover art designed by the band's long-time artist Koji Yoda and featured a bonus disk that contained some remastered/remixed hits off of previous efforts, marking the first time that the band has remixed their own work.

Q: During the recording of your latest album, “Dum Spiro Spero,” your native Japan was majorly affected by the earthquake and subsequent tsunami. Did the disaster change the focus of the album? How did this situation influence the band overall?

Kaoru: When something of that scale happens, there is no way that things will not change. This album, for us at least, became something of a prayer of hope for the future.

Q: You released a video for “Different Sense” off “Dum Spiro Spero” which includes some controversial and alarming images. The band has gained a worldwide reputation for being unique and continuously pushing societal norms. Where did the concept for this video come from? Do you aim to shock the world when coming up with concepts?

Die: We had the director, who we have worked with for many years, sit down and listen to the song, and then gave him free reign to express whatever came to his mind. In his words, “If you are going to try to express anything in this country now, there is no way around the ugly and the grotesque.” The thing is this: you’re expected to follow the “guidance” of the establishment in Japan now. For example, you are now expected to paint a pretty picture saying that “the world is a beautiful place and this is forever.” He felt, and we felt, that it is far more “harmful” to the mind to blindly follow the establishment, and to tell you the truth, the pretty picture they are trying to paint is boring as hell. So, all in all, I think we made the right call here.

Q: The North American tour kicks off December 4. With such a vast catalog of songs to choose from, how to you select your set lists? Do you alter the set depending on what country you’re performing in?

Kaoru: It all comes down to what we want to play at that moment and what is needed to express the moment. We try to get as much variety in there as possible.

Q: How to you compare touring in the United States to other countries?

Kaoru: There really isn’t that much difference, expect the fact that it isn’t Japan. When touring Japan, the fans do go crazy but it is amusing to watch in a sense, because they all seem to move in uniformity, with no individuality to be found.

Q: Dir En Grey has been together for nearly 15 years with all original members. What’s the secret to staying together as one group for so long?

Kaoru: We make each other who we are and I wouldn't be me without them.

Q: You recently performed a free show in Japan with a striking on-stage look of disfigured skin on your faces. Whose idea was this? What was the message you were trying to convey?

Die: I really don't remember who thought of it, but we wanted to do something different and fun. I think someone just said “Hey, wouldn't it be fun if we just jumped out and did a gig with all the special makeup from the “Different Sense” music video?” so that is just what we did.

Q: As a group Dir En Grey has been very vocal the current situation in Japan. There is much that still needs to be repaired and questions that need to be answered. As a respected band across the globe with a platform, do you feel a responsibility to speak for those that cannot? What’s your message to the world?

Die: Ever since the earthquake in March, they have been finding high levels of radiation all over Japan. Now, people live in fear of the unknown and the invisible radiation. What I really want to know is what is really going on. Armed with the truth, people are able to deal with issues. They are able to live their life knowing the choices they need to face. Apparently though, we don't have the right to know the truth, so the Japanese public is not privy the essential information that is needed to call the shots in our lives.

Q: You’ve recently posted a billboard in the center of Times Square with the words “Scream For The Truth” boldly displayed. This is sure to attract a lot of attention in the one of the world’s largest media hubs. What is your goal with this campaign?

Kaoru: Our goal is to be able to live our future based on our own judgment and choices, which needs to be based in facts and in truth. We feel that everyone should have the right to do so.

Q: What bands influenced you growing up? Any American bands you admired?

Q: What is something you each personally want to accomplish that you haven’t yet?

Kaoru: Personally, I want my own studio.

Die: I have had the pleasure to tour the world and see many countries. But the world is far, far larger and there are many many countries that I haven’t visited yet. I do want to travel the world to observe.