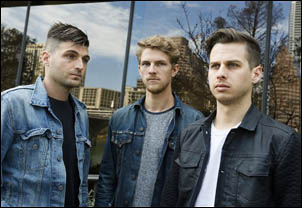 NASHVILLE, Tenn. (AP) — Mark Foster's favorite hit songs are the ones written without thought given to eventual chart potential. So when it came time for him to pen the smash follow-up to his band Foster the People's unexpected out-of-left-field 2011 hit "Pumped Up Kicks," he didn't even bother to try.

"I feel like trying to write a song in order to be a big hit is just not something I'm interested in because it's not going to come from an authentic place of expression," Foster said. "I've heard a lot of bands try to do that type of thing on their second record, especially if they happen to have a hit or a couple of hits on their first, and a lot of times the stuff ends up sounding like Budweiser commercials, you know? We don't make music for that reason. We're not the corporation of Foster the People. We're a band."

The tsunami-like experience of having a multiplatinum, Grammy-nominated hit had left the trio feeling unmoored as they completed touring behind their debut. They weren't sure exactly where they wanted to go, but directly to the studio wasn't it.

"Fame is such a weird concept," bassist Cubbie Fink said. "It's sort of intangible. … Really it's a bizarre process to be striving for something, attain it, then have the whole world around you change — but you're still kind of the same in the middle of it."

So Foster and Fink traveled the world for inspiration for the 11 songs that would go on to make up "Supermodel," out this week. And drummer Mark Pontius hunkered down at home, processing the experience in a different way.

Foster returned from his travels with song sketches, half-finished ideas and a general concept of where he wanted to go. The band moved into a home in Malibu, Calif., that had a studio and sorted everything out with Grammy-winning producer Paul Epworth, who co-wrote and produced some of the masterful tracks on Adele's "21," including "Rolling In the Deep." Epworth also produced some of Foster the People's gold-selling 2011 debut, "Torches."

The Malibu location — among the toniest in the U.S. — crystallized everything for Foster. He had just returned from visiting North Africa and the Middle East, where he encountered people who live a simpler subsistence lifestyle, and the juxtaposition resonates on "Supermodel."

"It's really about, I guess, the difference between the culture that we live in in L.A. and looking at the rest of the world and seeing how other people live with the focus on kind of just community, communication, real connections, social media and how social media is affecting our culture now," Foster said. "I think it's looking at isolation in the U.S. and that being something that's kind of growing, and comparing that to other cultures that are really very in tune with how people have been living for thousands of years."

His experiences aren't just reflected thematically. Sounds he heard are woven into the album's gauzy dream pop, adding a flavor — and a challenge — he hadn't initially expected. For instance, album opener "Are You What You Want to Be?" with its 6/8 time signature and Dadaist lyrics leans heavily on sounds he heard while in Morocco.